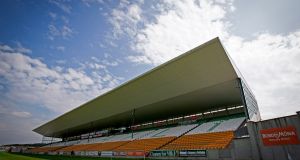 Offaly and Wexford do battle at O’Connor Park on Saturday. Photograph: Inpho

Leinster SHC round three
Offaly v Wexford
O’Connor Park, Tullamore, 7.0
This is a shot to nothing for Offaly in the sense that next week’s showdown with Dublin has long been identified as determining the relegation spot. For periods against both Galway and Kilkenny, Kevin Martin’s team looked at home competitively but when the opponents pushed for home, they struggled. They will be upbeat about this after Wexford’s close call against Dublin but David Fitzgerald’s team will be better for that match.

The constant movement of their backs will be a challenge for Offaly who tend to stutter at times in attack. Route one mightn’t be so profitable as Wexford coped well with Liam Rushe and they might also want to push up on the puck-outs. At times wasteful last week, the visitors will be better tuned in this time.

Leinster SHC round three
Galway v Kilkenny
Pearse Stadium, Galway, 4.0
An eagerly awaited competitive match between the counties for the first time in two years since when Galway have become champions. Progress has been patchy in the interim after an at best semi-engaged league and a less-than-top-gear outing against Offaly. There is also pressure on them given the poor record against Kilkenny. But this will need to be better, as Micheál Donoghue hardly wants to repeat the error of Tipperary in allowing an evolving Kilkenny a major morale boost in the league final.

Galway’s big advantages are their physique and pace and Kilkenny’s rookies have looked more vulnerable in that regard than the old team in the years of plenty.

That said, they will enjoy this as the county’s record as underdogs under Brian Cody is formidable and they have shown the characteristic resilience when making late charges in both matches to date. They are however up against the highest-quality attack they have faced to date and which looked to be posing more of a goal scoring threat than last year.

Munster SHC round two
Tipperary v Cork
Semple Stadium, Thurles, 2.0
League formats typically give teams an immediate opportunity to bounce back from demoralising defeats and that is a lifeline for Tipperary, whose last two outings (including the league final) have been 24-carat disasters, but have they shown any sign of being able to grasp it? Limerick indiscipline kept Tipp afloat for periods of last week’s match but Cork’s defence was quite composed in the defeat of Clare and the home team on Sunday will need more than Jason Forde’s – admittedly impressive – accuracy off the tee. The idea that Michael Ryan needs to unleash his bench wasn’t exactly vindicated by the contributions of the returning Séamus Callanan, Patrick Maher and Brendan Maher – all of whom looked as if they may need more time. They’ll also have to cope with Anthony Nash’s laser-guided puck-outs, which proved as much of a weapon as ever.

The loss to injury of Alan Cadogan and Robbie O’Flynn leaves Cork shorter of pace than they’d want but it’s only the arcane protocols that govern this rivalry that could prompt anyone to favour Tipp but if they’ve anything left surely they’ll produce it here.

Clare v Waterford
Cusack Park, Ennis, 3.30
Waterford’s sorrowful preparation for their homeless championship continued during the week with the news that two players of the importance of Austin Gleeson and Pauric Mahony would miss the county’s first match in Munster. Clare’s high-octane tussle with Cork adds further context to the challenge facing Derek McGrath’s team but it’s maybe not quite as simple as that. Certainly, home venue – for the first time in 21 Munster championships – is an advantage but Clare’s unreliability in competitive finishes was emphasised last week when they drew level twice in injury-time only to fall adrift by the whistle. It’s also worth pointing out that under McGrath they have rarely given poor accounts of themselves (allowing that one of those occasions was last year’s first provincial outing against Cork).

The advantage a system-led team has in these circumstances is that they can cover personnel losses, as Waterford did in the absence of Tadhg de Búrca in last year’s All-Ireland semi-final. It’s also to the home side’s benefit that they have played already but there were signs in Páirc Uí Chaoimh that Clare are still liable not to make the best of their attacks. With the pressure eased by their various misfortunes, Waterford have a chance here.