Champions Dublin up and racing as Wicklow get the runaround 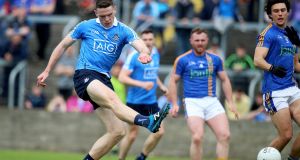 Blessed are the merciful, for theirs is a 23-point victory while sparing their opponents a more crushing blow. As the opening chapter of Dublin’s All-Ireland football defence it’s a humbling lesson.

Four first half goals, 11 different scorers, and equalling the record margin over Wicklow from 117 years ago was enough: Dublin might well have scored another six goals had fate not got in the way, and that’s assuming they were properly trying. Either way they are up and sprinting.

It’s what happens when they meet the lowest-ranked team in the country, Wicklow never beating Dublin in either league or championship, or ever winning a Leinster title – and when Dublin effectively put out their best 15, all moving like the supreme heavyweights that they are, floating like butterflies and stinging like bees.

“We just wanted to get a performance,” said Jim Gavin, the Dublin manager as cleanly clinical as ever in his post-match assessment. “We’ve just been focused on this game, not beyond this hurdle, so all of our energy and drive went into that. And I thought the guys, their attitude, brought that energy to the game.

“They’ve trained really well coming into this game, a very ambitious and determined group, and their application over the last number of weeks was shown there in terms of their performance. The team will always keep evolving, and it’s great to see some players step up to the mark there and get some great scores.”

Blessed are the playmakers, for they will inherit what they deserve. Dublin opened with an unanswered 2-7 with just over a quarter-hour played, and were 18 points up by a half-time, Brian Fenton crashing in their first goal after seven minutes, Dean Rock palming in the second on 14 minutes. Ciaran Kilkenny and Con O’Callaghan were both thunder-bolting and added goals each just before half time. Ouch.

By then Dublin had missed several more goal chances, Eric Lowndes slipping in front of a half-open goal, Philly McMahon smacking the side netting. It hardly mattered as Paddy Andrews was back in his best form, finishing with three from play, and Kilkenny ended up with 1-7, dead-heating with Fenton for man-of-the-match.

“We’ve a lot of work done on that aspect of the game, offensively,” added Gavin. “And in terms of our defence, our tackling was very disciplined. We know they have a few very long range kickers, and I think the work we’d done on the tackling paid dividends, in that I suppose the art of tackling we’ve gone after, heavily, and it showed there. So all round the way the guys approached and went after the game was very pleasing.”

Blessed are the spirited, for something will eventually come out of nothing. It took Wicklow 17 minutes before James Stafford opened their scoring, by then deployed to full forward to give to something to aim for. Stafford the punched in a close range goal on 26 minutes, getting onto a high ball ahead of Stephen Cluxton, and giving the few Wicklow supporters among the mostly sky blue crowd of 11,786 to cheer about – before Kilkenny and O’Callaghan hit back with two goals.

Dublin started with 11 of their All-Ireland winning 15 (missing were Cian O’Sullivan, Jack McCaffrey and Eoghan O’Gara, John Small unavailable for family reasons). Brian Howard made his first championship start, doing just fine, and for Gavin this was always the plan – whether they were playing Wicklow or not.

“I don’t think we’ve ever do experimentation. Those jerseys are earned, those players that represent the county, 21 players today, earn that right. There were another five players who didn’t partake, and will be bitterly disappointed that they didn’t. I know that hunger will resume next week.”

Into the second half and Dublin eased off, using up all six replacements with 20 minutes left to play, Colm Basquel and Conor McHugh getting their names amongst the scorers. Next up for the All-Ireland champions are Longford, who took out Meath in their quarter-final – and the last time that happened was just before Sean Boylan took over as Meath manager. Blessed on the hopeful.

“We will always reflect on our game, digest it, then we’ll focus in on the next game,” Gavin said of that Longford challenge, before answering the broken record question: is the Leinster championship still a competitive event?

“I think if you ask any of the players, the Leinster championship means a lot to them. It’s their province, it’s where they’re form. They’re going hard at it to win the title this year. There’s no name on the trophy beside the 2018 champions. We just want to get over the next hurdle.”

Paul Flynn also came off the bench for his first game time with Dublin this year, still looking monstrously fit, and Eoin Murchan got a run out in the defence, displaying hints of why his pace defies his small size. McHugh looked a little lackadaisical with some of his efforts towards the end, possibly understandable given the margin, but Fenton didn’t hold back – forcing a brilliant save from Wicklow’s teenage goalkeeper Mark Jackson, who also contributed two long-range frees from play.

Only everything about Dublin’s performance, throughout the field and from the bench, suggests they are perfectly well primed to win an eighth successive Leinster title without breaking stride – especially with Kildare and Meath now both out of the way, Michael Darragh Macauley has brought back a little extra vigour around midfield and with Jonny Cooper and Philly McMahon as well tuned in as ever, blessed are the champions.