Roscommon back into Connacht final after Leitrim win 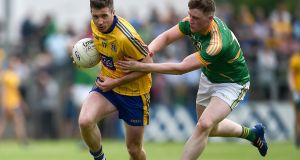 Reigning Connacht champions Roscommon booked their place back in the provincial decider with a 14 point win over Leitrim on Saturday at Páirc Sean Mac Diarmada.

Twelve different players got on the scoresheet for Kevin McStay’s team, as Cathal Cregg came off the bench to score four points from play.

Leitirm were unable to follow up on their quarter-final win over New York, and despite a strong start they trailed 0-9 to 0-2 at the interval and went without a score for almost 40 minutes before their third. In that time Roscommon scored 11 points.

The hosts were made to pay for Jack Heslin’s early missed goal chance, and after dominating the opening stages (playing into the elements) they only had two Keith Beirne points to show for their efforts.

John McManus got on the end of a swift counter attacking move to fist over the final score of the game as Roscommon fell just short of last year’s 17 point win in a third win in as many years against their neighbours.