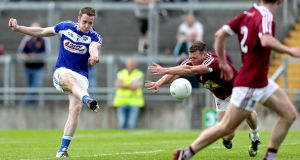 Laois’ Paul Kingston scores one of his three goals despite an attempted block from Westmeath’s Alan Stone during the Leinster SFC quarter-final at Bord na Mona O’Connor Park in Tullamore. Photograph: Laszlo Geczo/Inpho

Laois progressed to a meeting with either Kildare or Carlow in the Leinster Senior Football semi-final after a resounding 10-point victory over Westmeath in Tullamore.

Laois took the lead for the first time when substitute Niall Donoher shot over in the 33rd minute and they finished the first half in blistering fashion with a further three unanswered points from Ross Munnelly (free), Colm Begley and Trevor Collins.

Westmeath, despite starting promisingly, looked in real trouble at the break, trailing 0-10 to 0-6, with John Connellan already black-carded and the lively Luke Loughlin ploughing a lone furrow up front.

The Laois goal that had been threatening finally arrived 11 minutes into the second half when Paul Kingston finished clinically to the net. He notched his second four minutes later – troubled Westmeath full back Sam Duncan unable to keep the ball out.

In the 57th minute Laois were disallowed a goal at one end (Benny O’Carroll adjudged to have thrown the ball) before Westmeath countered and Mark McCallon found the net after a goalmouth scramble involving Kieran Martin. Laois never panicked and dismantled a porous Westmeath defence two minutes later for Paul Kingston to complete his hat-trick.

That ended any chance of a Westmeath recovery and Laois substitute Evan O’Connor notched 1-1 in the space of a minute to kill the tie off. Captain John Heslin, unable to start due to a hip injury, missed a goal for a dejected Westmeath side (who are short eight of last year’s side) in the 66th minute and manager Colin Kelly faces a massive task to lift his depleted side for the qualifiers.