Dublin hold on to defeat Wexford in the Leinster Minor Championship

Comfortable wins for Clare and Waterford in Munster 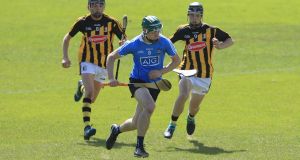 Dublin confirmed second place in Tier 1 of the Electric Ireland Leinster Minor Hurling Championship when accounting for Wexford by 0-16 to 1-10 at Parnell Park on Sunday afternoon.

With Kilkenny having secured top spot by virtue of their win over Laois on Friday evening, Dublin always looked most likely to prevail despite a slow start in horrific conditions.

The visitors enjoyed the early momentum through early scores from Thomas Murphy and Cian Molloy and they pushed three points clear by the seventh minute thanks to a brace of frees by Jack Kehoe.

Gradually, Dublin reeled in their opponents with midfielder Donal Leavy firing over three excellent points from play and they pushed ahead by the 14th minute thanks to a Séamus Fenton free.

The hosts finished the half in the ascendancy and points by Ciarán Hogan, Darragh Power and Fenton edged them 0-9 to 0-6 clear by the interval.

The second half saw Dublin dominate without punishing their opponents, who were reduced to 14 players by the dismissal of Murphy in the 44th minute.

Hogan was harshly dismissed in the 59th minute as Wexford fired a consolation goal in injury time through substitute AJ Redmond.

In the Munster Minor Hurling Championship, Clare recovered from last week’s defeat to Cork by overcoming Waterford by 3-21 to 2-14 in Cusack Park.

An eighth minute penalty from Kealan Guyler set Clare on the road to victory and they increased their lead as the lively Mark Rodgers netted soon afterwards.

Waterford bounced back well through a goal of their own from Caolan MacCraith as they trimmed their arrears to 2-9 to 1-9 by half-time.

A James Power goal offered further hope to Waterford upon the restart but Rodgers effectively settled the issue with his second goal on the hour mark.

In Semple Stadium, three first-half goals proved pivotal as Tipperary started their campaign with a 4-15 to 1-13 win over Cork.

James Devaney, Sean Hayes and Kevin Maher all netted before the break with substitute Devon Ryan sealed Cork’s fate upon the resumption.