Carlow in dreamland after first win over Kildare in 65 years 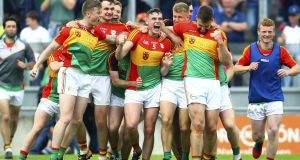 Carlow caused a sensation in Bord na Mona O’Connor Park on Sunday as they sent a shell-shocked Kildare packing from the Leinster championship.

It was Carlow’s first win over their far more famous opponents since 1953, third overall and it was a richly deserved one as their great work rate and intensity seemed to catch their opponents by surprise.

Kildare didn’t know what hit them and hundreds of Carlow fans descended onto the pitch afterwards to celebrate in scenes very rare for an early round championship clash.

The winners fought a rear-guard action in the second half after leading by five points at half-time. Despite playing with the wind in that second half, they pulled most of their team back and it worked on the day as a stagnant Kildare, who were guilty of some wild shooting, just could not break them down.

Amazingly Carlow did not have a single wide and their hero was Paul Broderick, who kicked 11 points, nine from play in a fantastic sharp-shooting display.

Predictably, Kildare came back at them in the second half and got the gap back to three points with eight minutes left. However, with victory in sight, Carlow were not going to be denied. Kildare corner back Mick O’Grady was sent off after picking up a black card to go with his earlier yellow and then his opposite number four, Conor Lawlor, clinched it with a 73rd-minute goal after a brilliant break up field.

The first half was all about Carlow as they tore into their opponents with great enthusiasm while the two goalkeepers emerged as pivotal figures.

A blunder by Carlow goalkeeper Robbie Molloy as he fumbled a miss-hit Paul Cribbin shot allowed Daniel Flynn in for a tap-in goal in the sixth minute and a 1-1 to 0-3 lead that Kildare did not deserve at that stage. Nine minutes later Molloy rescued Carlow when saving a penalty from Eanna O’Connor after Niall Kelly was fouled.

By that stage Carlow were leading by 1-3 to 1-1 with their goal coming from a 10th-minute free from Daniel St Ledger – his kick from over 50 metres somehow flew all the way to the net with the fast bounce deceiving Mark Donnellan in the Kildare goal.

With Kildare kicking some bad wides, Carlow were much more proficient in possession. They played a bit deep at times but excellent free-taking by Broderick, who got six first-half points, five from frees, put them in the driving seat. With solid defence and Seán Murphy showing fantastic pace at midfield, Carlow fully deserved their half-time lead of 1-8 to 1-3.