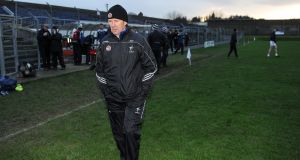 Jack O’Connor: the former Kerry boss will be looking for a badly-needed Kildare victory when his side face Laois at O’Moore Park on Saturday. Photograph: Matt Browne/Sportsfile

With just two points from four games, three defeats and three games remaining, Kildare may or may not need some added incentive going into Saturday’s Division Two meeting with Laois in the Allianz Football League.

Another defeat, and their last two games also against teams currently ahead of them, would leave Kildare staring down the barrel of Division Three football for 2021, while also relegating them to the Tier-2 championship this summer – unless they manage to get to the Leinster final.

Either way that added incentive is there in several forms – including the constant reminder in the local press of playing their football in a newly redeveloped St Conleth’s Park in Newbridge in 2021, that project now expected to start in November.

St Conleth’s Park was one of the 25 individual projects benefitting from Government grants totalling €77.4 million, announced last month, as part of the latest Large Scale Sport Infrastructure Fund (LSSIF). The project will see the construction of a new 3,000 seated stand including changing facilities and public toilets, plus the installation of floodlighting, upgrade works to pitch including a new playing surface.

The total cost of the project has been put at €10,500,000, with Kildare receiving the Government funding grant of €4,875,000. The plans will be going to tender within the next six weeks, and will be closely monitored by Croke Park, given the debt the Páirc Uí Chaoimh redevelopment ended up amassing, the Cork County Board now owing the banks €21.5 million.

“When you are spending €10.5 million I would expect that to happen anyway,” Kildare County Board treasurer Alan Dunney told the Leinster Leader. “It will mean that Croke Park will keep a closer eye on these projects with an engineer on site ensuring all is going well.”

There is also added incentive too for manager Jack O’Connor to keep Kildare in Division Two, not least because he’s been making the 645km eight-hour round trip from his home in St Finian’s Bay in south Kerry to the county’s Hawkfield training base outside Newbridge.

The All-Ireland senior and minor-winning manager with Kerry had also set out not just to survive in Division Two.

“Look, the first priority will be to try to do well in the league and to get promoted,” said O’Connor following his Kildare appointment last September. “That would be key long-term, because you have to be trying to play against those teams on a consistent basis.”

Travelling to MW Hire O’Moore Park on Saturday (7.0pm) won’t make that task any easier, Laois currently three points clear of them in fifth, with Kildare sixth (with Fermanagh and Clare also on two points), although Kildare are at home for the last two games against Cavan (currently topping Division Two) and Westmeath (currently in fourth).

Kildare have created something of a fear factor around St Conleth’s Park, especially after the “Newbridge or Nowhere” campaign for their 2018 football qualifier against Mayo, which the Lilywhites won.

The competitive nature of Division two is well illustrated by Cavan who lost their opening game heavily to Armagh but have since recovered well, winning three times. This weekend they play Clare, who have lost two games by a point.

Roscommon against Westmeath could have a crucial bearing on the promotion race, with Westmeath bidding to go from Division Three to Division One in successive seasons. Roscommon are attempting to return to the top flight at the first attempt, having been relegated last year.

Kildare were relegated to Division Two at the end of the 2018 campaign, when they failed to win a single game, and last year ended up fourth in Division Two, with a record of three wins, one draw, three losses.