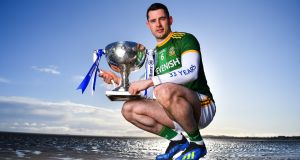 Meath footballer Donal Keogan at Allianz Ireland’s announcement of a five-year extension of its partnership with the GAA as title sponsor of the Allianz Football and Hurling Leagues on Tuesday. Photograph: Brendan Moran/Sportsfile

There is frequently some trade-off between the advantages gained by playing Division One football versus the confidence lost by dropping back to Division Two – and Meath are currently caught cleanly in between.

Heading into their last three games – Galway in Navan this Sunday, then Dublin in Croke Park and Monaghan in Clones – Meath are still without a win and already it seems facing a losing battle for survival. Not that some of the advantages have been lost on joint captain and defender Donal Keogan.

They were lucky on the 13th attempt to get back up to Division One after the 2019 campaign, a slow and twisting road back to the top flight. Meath were relegated from the old Division 1B back in 2006, with the likes of Graham Geraghty still on board, and had fallen either short or a little long of promotion back to Division One in the 12 seasons since.

Keogan is not conceding a prompt return to Division Two just yet, but either way admits Meath will feel better served by their experiences going into the championship this summer and beyond.

“Yeah, I think that’s the general consensus,” he says. “If we look at the league where we are now versus where we were at the end of last year’s league, we’re definitely going in the right direction.

“Andy McEntee gave the analogy before: if you look at the Facebook share prices . . . nothing goes up in a straight line. There’s ups and dips and troughs. The general consensus is that we’re going in the right direction. And I think that can be seen. Last week’s performance [against Kerry] was very good. Obviously the result didn’t go our way. But the performance we’re putting in, we’re quite happy with that. It’s just building on that, getting better and continuing with that.

“To be competing in Division One, it’s also essential that you can create scores from a number of different areas. That’s something that we’re trying to address. We’re working a lot on it at the minute. Hopefully it will come together in the last couple of games. It’s getting better. It was a slow start for us at the start of the league. The last couple of games we were building, so it’s about keeping going on that. Keeping going in the right direction.

“At the start of the year, we targeted survival, and there has been teams who have yo-yoed up and down. But Galway are the team I look at as having survived and now kicked on hugely. So our number one goal is to stay in Division One. But that experience that lads have got at Division One pace and Division One level is invaluable going forward.”

Keogan was speaking at the Allianz Ireland announcement of a five-year extension of its partnership with the GAA as title sponsor of the Allianz Football and Hurling Leagues, now spanning 33 years, making the insurance provider the longest-committed supporter of the GAA.

Meath won the league outright in that season of the Allianz sponsorship, and Keogan also admits that closing the gap on the top teams such as Dublin certainly isn’t getting any easier.

“That’s the pinnacle that Dublin have raised the bar that everyone has to get up there. It’s not only Meath. The likes of Kerry and Mayo, they will be looking to targeting Dublin as well.

“That’s the toss-up. We had good momentum last year, coming out of Division Two, getting to a league final, six out of seven wins in the league, confidence was at an all-time high, the set-up was buzzing versus now where you have four losses versus a higher standard of football potentially.

“I think definitely the higher level of football has to be an advantage for us going forward. We didn’t have any experience of that, bar potentially playing Dublin in the Leinster Championship, of playing Division One teams.

“We have now played Donegal twice last year, three Super 8s games and four Division One teams – Tyrone, Kerry, Mayo, Donegal, they are up there in the top six teams in Ireland, I’d say. So the exposure we have gotten has to be an advantage for us going forward. I definitely think we are in a better place going forward and the consensus in the whole Meath set-up would be we are in a better place than we were last year.”

Jack Grealish needs to show that his remorse is real this time 12:13
Tottenham give 550 non-playing staff a 20 per cent pay cut 12:14
Sky Sports customers save on bills; rule changes could change rugby utterly 07:25
Uefa meet to re-evaluate hopes of finishing current season 06:48
Gerry Thornley: Changes to tackle laws could transform rugby by time of next World Cup 07:18
Crossword Get access to over 6,000 interactive crosswords