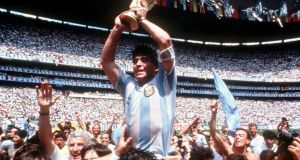 Diego Armando Maradona, in many people’s eyes the greatest footballer of all time, has died of a heart attack aged 60. Maradona, who inspired Argentina to the 1986 World Cup, was deified at home, in Naples - where he took Napoli to their first-ever Scudetto in 1987 - and around the world. And this morning Keith Duggan has paid tribute to El Diego, and the absorbing, alluring grip he had on those who were privileged enough to exist at the same time as him. He writes: “In that football strip - and Argentina’s may just be the most beautiful jersey of all - Maradona always seemed caught between ecstasy and tears of sadness, as if he had been put on earth just to render explicable the overflow of emotion and feeling that runs through his city and country.” And Mary Hannigan has looked at five key moments in Maradona’s career, from his senior bow with Argentinos Juniors in 1976, his goals against England in 1986 through to title glory with Napoli a year later.

In today’s GAA Statistics column Eamon Donoghue has looked at the rebirth of the long kickout, which has risen like a phoenix from the flames in this year’s football Championship. He writes: “After a near decade of chip restarts, possession football, and a hopeless pursuit of beating Dublin at their own game, a counter movement appears to be emerging.” And one man in particular is thriving off the back of this - Cavan’s Thomas Galligan, who has been a driving force behind the county’s Ulster title win and journey to the All-Ireland semi-finals. “Playing with abandon, throwing his body into aerial contests and tackles, Galligan and his Cavan team are a winning contradiction to the modern coaching manual.”

5 Colum Eastwood: Seamus Mallon’s offer is still on the table if unionism is interested

8 Sturgeon ups the ante with promise on independence vote

13 Suzi Quatro: ‘If he’d done that backstage he’d have been singing soprano for the rest of his life’

14 Coronavirus: Vaccination of over-70s to start next month, says Donnelly

15 Blindboy Boatclub: ‘I had the choice of being a psychotherapist or be a mad bastard’

24 My Covid experience: ‘The mind starts to race. Oh God, why didn’t I do more with my life?’

25 One mask is good. Would two be better?

27 Talks resume between unions and officials over reopening special schools

29 The Offload: Ireland’s succession issue at 10 on show once more

31 Covid-19: Passengers may be required to pay for stay in quarantine

33 Traveller who tried to book hotel wedding awarded €15,000 for discrimination

34 Una Mullally: Government failing to lead us through pandemic

35 Number of people charged with domestic violence surges amid pandemic

36 Covid-19: How to look after yourself if you catch the virus