Business once dominated by Vegas and the mafia is now respectable - but at what cost? 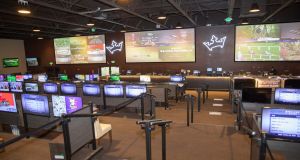 Dwayne Wade was an NBA rookie when he ran into Allen Iverson at a Puerto Rico casino. Any nervousness at meeting one of his heroes was quickly assuaged when the Philadelphia 76er threw him a $1,000 chip and said, “Yo, go play this, young fella!”

That was the way of it with Iverson, an inveterate gambler who once lost $1 million in a single night’s blackjack. There is no exact figure on how much he eventually squandered at the tables, just ample evidence it was an essential part of a profligate lifestyle where he blew through career earnings of $154 million and was once banned from several establishments in Atlantic City.

These days, Iverson is fronting a television advertising campaign for PointsBet, one of many online gambling sites currently driving the lucrative gold rush in American sports betting. That he is promoting the very vice that laid him low matters not a jot. Charles Barkley, another hall of fame player with an addiction so severe he confessed to losing $1 million in a single session “maybe 14 or 15” times, was hired by DraftKings to flaunt their wares via an ironic commercial where he sees a doctor about his “winning deficiency”. You don’t see alcoholics being deployed to flog beer but, apparently, this is different.

Michael Jordan, notoriously fond of a flutter himself as per the conspiracy theory about his sabbatical from the NBA, recently invested in and became an adviser to DraftKings. Their stock went up eight per cent that day and nobody was even slightly perturbed at the Charlotte Hornets’ owner taking on this side gig because betting on sports, once a nice little earner for local mobsters, has gone all respectable. The days when wannabe punters needed a connection to a neighbourhood hoodlum to bet the over or under on NFL games are gone.

Two years ago, the United States Supreme Court struck down the Professional and Amateur Sports Protection Act which had up to then restricted legal gambling to Nevada and allowed the mafia to hoover up billions in extra-curricular sports action on the street. Now, all bets are on.

So far, 25 states and the District of Columbia have legalised betting, reaping massive financial rewards in the process. Last month alone, the residents of New Jersey gambled over $800 million in retail and online bookmakers, yielding $7.4 million in tax. For cash-strapped local governments (who will no doubt eventually push for a larger share of the bounty), these fresh revenue streams are being used to make up budget shortfalls and it’s estimated that over the next decade sports betting will grow into an $81 billion industry in America.

The numbers are so gaudy and the money benefiting so many different sectors that there seems a determined effort to just ignore gambling’s fabled capacity to ruin lives and destroy families. From the online betting outfits to the government bean counters to the television networks awash with ads for various betting apps, everybody is making too much money to dwell on the downside. The attack of conscience that has some in Britain and Ireland pondering the immorality of promoting this stuff and mainstreaming the habit has not yet even registered in these parts. The dollar signs have blinded all involved.

Just over a year ago, ESPN started “The Daily Wager”, a show to prepare you for the nightly points spreads across every code. The so-called worldwide leader in sports has integration deals with Caesar’s Entertainment and DraftKings on their digital platforms so that when somebody clicks on a betting ad from the ESPN website, they get a slice of the action. NBC has a similar arrangement with PointsBet. For the gambling companies, these relationships are about normalising what was once considered illicit. Not anymore, not with Bryson DeChambeau strolling around Augusta last week with the DraftKings logo on his flat cap.

“The negative societal impact of additional gambling cannot be minimised in a community,” said Roger Goodell, commissioner of the NFL. That was just a decade ago. Goodell has since allowed clubs to sign contracts with outfits like BetMGM and to create gambling lounges in their stadia. There’s too much gold to be mined in them thar credit cards.

Traditionally the most puritanical about betting, Major League Baseball hangs a sign on every locker-room wall outlining Rule 21d, strictly prohibiting wagering. Yet, on the 100th anniversary of Arnold Rothstein and Sport Sullivan persuading the Chicago White Sox to throw the 1919 World Series, baseball climbed into bed with FanDuel. The same outfit is also the official gaming partner of the PGA Tour.

Everybody is in on this because the sums involved are astounding and the potential nearly limitless. Fox Sports Midwest (a regional television network in St Louis) recently sold its naming rights to Bally Casinos and is promising viewers the capability to bet on games through their televisions. Soon, there will no be no escaping the false promises of instant riches, especially since, like canny drug dealers, most offer opening “free bets” worth $1,000. Never charge for the first hit.

Ten million Americans already have a gambling addiction and, at last count, just nine states where it’s been recently legalised have apportioned any extra funding to helping those afflicted. An estimated 23 million others have got into debt from betting and one report puts the amount owed at somewhere around $55,000 per individual. Numbers that are going to grow and grow. Bet on that.