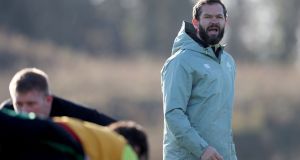 Andy Farrell is likely to delve more deeply into the Irish squad for Sunday’s Guinness Series/Autumn Nations Cup game against Georgia when he announces his side at lunchtime today, for this was always the game to do so.

There also seems little point in having 34 players in the IRFU’s High Performance Centre, excellent facility and all that it is, and not giving them all some game time.

Inevitably in the critical aftermath of last Saturday’s defeat by England, there has been calls for change, often for change’s sake, but while it might disappoint some, keeping talented young players such as Craig Casey, Gavin Coombes and Harry Byrne in their provincial set-ups makes sense.

Conor Murray would have been proud of Casey’s box-kicking and game management in Glasgow’s downpour last Monday, but like Coombes and Byrne, he came into this season with just three starts. He’s now had a run of six starts this season, Coombes has had four and Byrne five.

The sum total of their game time in Europe is Casey’s two minutes off the bench against Racing and a dozen against the Ospreys last January. They’re all better off where they are than being chucked into the test arena at a week’s notice.

More perplexing, given injuries to Max Deegan and Jack Conan has left the squad with just five backrowers, is that Rhys Ruddock’s form hasn’t been rewarded with a call-up. His last start for Ireland was against Russia in Kobe when a try-scoring man of the match, but he still hasn’t featured since the World Cup.

This perhaps suggests Tadhg Beirne (one of Ireland’s best performers in Paris) might be playing at blindside as, like the others yet to feature, John Ryan, Ultan Dillane, Kieran Marmion, Stuart McCloskey and Shane Daly, he merits game time. Daly, indeed, hasn’t played a game of any kind since August 30th.

In all of this, it’s also worth bearing in mind that Italy were at full-strength against Georgia, while Eddie Jones also played 11 of the starting XV and used 20 of the 23 which faced Ireland a week beforehand against the Lelos.

Balanced against the need to give some players game time, others have had a heavier workload and to some degree at least the Irish management also have to be fair to the provinces.

For example, on top of four starts in big games for Leinster since the resumption, Andrew Porter has started all of Ireland’s four games and went 80 against England. Besides, John Ryan’s scrummaging is equipped to cope with Georgia. Caelan Doris has played the full 80 in his five Leinster games and started Ireland’s four games, putting together back-to-back 80 minutes.

This game is also an opportunity to give Stockdale another run at fullback and Burns a first Test start at outhalf. With the need to get the lineout right, there’s an argument for starting both Rob Herring and Iain Henderson given their connection at Ulster, where the latter calls the lineouts.

Options at loose-head are reduced by Ed Byrne’s injury, while starting four Tests in a row would be a big ask of Cian Healy, so perhaps this is the game to risk Bealham at loosehead. Against the Georgian scrum, he will certainly be tested.

Whereas England played with two opensides last week, well though Peter O’Mahony again played, Ireland started without one, and Connors has made an impact off the bench in both games.