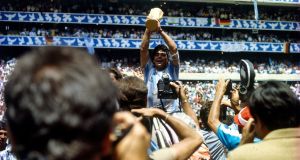 It was October 1976, Maradona was 15 years and 355 days when he was sitting on the Argentinos Juniors bench during their game against Talleres de Córdoba. “Just before the end of the first half,” he wrote in his autobiography, “Montes [his coach] turned towards me and fixed me with a stare, as if he was asking me, ‘Do you dare?’ I held his stare, and that was my answer.”

When he took to the field, he became the youngest player in the history of Argentina’s top flight. He made an impression, too. “Montes had said to me: ‘Go on Diego, play like you know how . . . and if you can, nutmeg someone.”

Needless to say, he did, Juan Domingo Patricio Cabrera his victim. “I immediately heard the Oleeeeeee of the crowd, like a welcome. I always say, that day I touched the sky with my hands. I knew something very important was starting in my life.”

Carlos Menotti received plenty of grief for not picking Maradona for his 1978 World Cup squad, having given him his debut when he was just 16 the year before. Menotti, though, insisted that he was too young for the World Cup, the nation finally forgiving him when Argentina won the tournament as hosts.

The World Youth Championships in Japan the following year was, then, Maradona’s first major international tournament – and he dazzled on its stage, most brightly of all in the 3-1 win in the final against holders the Soviet Union. His goal in that game made it six in six appearances, Maradona winning the Golden Ball for the best player in the tournament.

Only one other player has been awarded the Golden Ball in both the youth and senior World Cups, his compatriot Lionel Messi.

A game of, eh, two goals. The Hand of God, of course, made him England’s number one villain, although something of a hero for the Tartan Army (to this day they sing, to the tune of the Hokey Cokey: “You put your left hand in, your left hand out, you put your left hand in and you shake it all about, you do the hokey cokey and you score a goal, that’s what it’s all about. Oh, Diego Maradona. he put the English OUT, OUT, OUT!”).

His second goal that day, though, was one for the ages, topping most polls for the greatest ever scored. You might have seen it. As Jimmy Magee put it that day, “different class”.

“I never scored another goal like it,” he said a few years back. “It was every kid’s dream. We all dreamed of dribbling past the lot of them, including [Peter] Shilton. I still don’t understand what he did. I don’t know if ghosts or a UFO came down and took him away. He just left the goal wide open for me. I just went past him and that was it.”

Shilton still hasn’t forgiven him for the Hand of God, the suggestion that he was whisked away for the second goal by ghosts or a UFO would hardly have lifted his mood.

There’s one place on earth where Maradona is revered as much as in his homeland, the murals featuring his image around the city attesting to the fact, and that’s Naples. After two seasons with Barcelona, which ended in him being at the centre of the mother of all brawls after the 1984 Copa del Rey final, he parted company with the club and signed for Napoli, for a then world record fee of €7.8 million.

Until his arrival, no club south of Roma had ever won the league title, AC Milan, Juventus and Inter Milan the dominant forces in the Italian game, but all changed, for a while at least, when Maradona turned up. And over 70,000 Napoli fans were in the Stadio San Paolo for his welcoming party.

It took three years, but on May 10th, 1987 he delivered. A draw with Fiorentina proved enough to hold off Juventus, Napoli winning the first Serie A title in their history. Maradona, with 10 goals, a quarter of the entire team’s contribution that season, was the driving force behind their campaign.

They did the double that season too, winning the Coppa Italia, going on to win the Uefa Cup in 1989 and their second Serie A in 1990. And in a period when the north-south divide in Italy was never sharper, nor more bitter, Napoli’s success meant more to the city’s people than we could ever understand.

It’s hard to believe that Maradona only won the World Cup the once, something Pele, who won three, was never shy about reminding him of when those ‘who was the greatest?’ debates popped up.

But his day in the sun came in June 1986 when he led his country to just its second World Cup, eight years after they’d won their first.

They beat Uruguay, England and Belgium in the knock-out phase of the tournament in Mexico en route to the final against West Germany, Maradona scoring twice against both the English and Belgians.

He was nigh on suffocated by the marking of Lothar Matthaus in the final, but broke free to create the perfect through ball for Jorge Burruchaga to score the late winner. As captain, he lifted the World Cup, as well as the Golden Ball for the player of the tournament. His status back home? God-like.

“I was watching the little Brazilian referee, and when he put his arms up and blew the final whistle, I went crazy. In my body, in my heart and in my soul I knew I was living the most sublime moment of my life.”