Manchester City cruise into last 16 with win in Greece 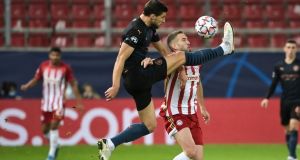 Manchester City have cruised into the last 16 of te Champions League in Athens on Wednesday night, this win at a canter giving them a record of a maximum 12 points with two matches remaining in Group C.

Pep Guardiola’s team were as ascendant as Olympiakos were insipid and can now turn focus to the Premier League where they sit in 13th position.

This victory came via the boot of the impressive Phil Foden, who possesses talent in abundance that made him the stand-out act against the Greek champions as it does so often.

In the final group games City play Porto and Marseille and could finish with a perfect record of six wins.

For Mendy this was a first appearance in almost two months due to a muscle injury and the left back was involved in City’s opening forays, one of which ended in a fierce Rodri shot that went straight at José Sá.

The Frenchman was part of a City wave that came relentlessly at Olympiakos until the interval. Foden was pivotal in this. One backheel to Sterling split the home defence. Then a glide to the 20-year-old’s left presaged a sharp effort which tested Sá

A combination with Mendy next allowed Foden to again unload, though this was blocked. As is so often true, City kept the ball and with it any prospect of scoring. Foden played a pass into the area aimed at Gabriel Jesus and this was repelled but Olympiakos already looked weary with 15 minutes not yet gone.

When Mady Camara dispossessed Jesus and Olympiakos took a first breather this did not last as City were instantly back at them, relaying the ball at will. An Ousseynou Ba air-kick of a clearance, then, was not what they required but summed up the mis-match on show. The sense was a City opener might lead to a several more.

Foden’s free-kick from the left came close to creating this, the delivery just beyond Ruben Dias. Before kick-off Guardiola had claimed full responsibility for City’s paltry 10 goals in eight Premier League matches. In this competition the record was fine: nine in three.

Partly at play in the domestic toils has been the prolonged absence of Sergio Agüero and when Jesus was clear in on Sá’s goal the Brazilian hit the goalkeeper where the Argentinean would surely have given City a lead to compliment their dominance. Finally 10 minutes before the break, they found it through a flowing move with an irresistible end product.

Gündogan chipped a pass to Jesus and he found the smart run of Sterling along the left. His no-look pass wrong-footed the Olympiakos defence and there was Foden to hammer home. This was pleasing yet at the interval a lead of 1-0 did not reflect City’s superiority against an opponent whose ambition was non-existent. Sterling twice might have beaten Sá with long-range attempts but the goalkeeper saved well each time. The period ended with an element of niggle – particularly from Rafinha, Camara and Ba who looked to rile Sterling and Stones.

When the second half commenced City were in the knock-out stages, conscious that even the concession of one goal would not affect this. Olympiakos showed more urgency – actually pressing City – but still Bernardo Silva could left fly at Sá and moments later Gündogan the same, the German narrowly missing the target. Foden continued to be the best performer.

A free-kick swung in from the left was struck with purity and when he vacated his left-hand berth this allowed Mendy to gallop in and cross: the on-rushing Sterling should have doubled the lead. Rúben Semedo’s challenge on Jesus took the No 9 down but no penalty was awarded. João Cancelo was the latest City player to spurn a chance when from yards out he hit the ball into Sá’s hands rather than either side of him.

As the last 20 minutes began Olympiakos’ hopes rested on a smash-and-grab strike. Yet with zero attempts on goal – to City’s 19 – this was unlikely. So it proved and with Agüero back on the pitch as a substitute Guardiola’s team ended in particularly ebullient mood.