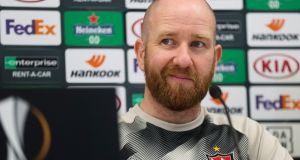 Dundalk kick off what they hope will be a short but productive residency at the Aviva stadium on Thursday evening with Rapid Vienna then Arsenal to come in the Europa League and, they hope, a cup final to play in between.

After their return to form in last week’s quarter-final at Dalymount there is a renewed sense of optimism around the club and news that Jordan Flores’s spectacular goal at Rovers back in February is among the nominees for Fifa’s Puskas award has, it seems, restored another little bit of the club’s collective self belief.

With zero points so far in their European group table, though, and the trophy cabinet in danger of being left bare through the winter months, Shane Keegan is pretty clear that there are higher priorities just now than Flores coming first in an online vote.

“We’ll all be hoping that Jordan goes and wins the award,” he says, “but we don’t want Dundalk’s high point of the season to be in a banquet hall or online or whatever. We want Dundalk’s highlight to be on the pitch, between the white lines and we have the opportunity over the next couple of weeks to make sure that that’s the case.”

Both sides made a succession of costly mistakes in Vienna’s 4-3 encounter a few weeks ago and Keegan acknowledges that if one side can tighten things up defensively, they will be in with a pretty good shout of winning this time around. Results for the respective sides since, which include Dundalk’s 4-1 defeat of Bohemians last Friday and Rapid’s 4-3 loss to Ried on Sunday, all seem to suggest “another goal-fest”, he admits. There will be no fear, he insists, however.

“We completely and utterly went toe-to-toe with Rapid and, certainly in our eyes, probably deserved to take something from the game on the night. All that apprehension [of not knowing quite how good opponents are] is gone. There’s no denying their quality or what they are about but do we believe we can go and get something from it? One hundred per cent.”

They’ll have to do it without Filippo Giovagnoli in the dugout as the Italian is banned from direct involvement in the game by Uefa while Pat Hoban’s season is over after the striker underwent ankle surgery this week. Dane Massey is back training after a long lay-off, though, and may well make the bench.