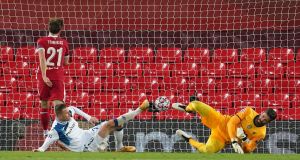 Qualification for the Champions League knock-out stages was the prize for Liverpool but resting some legs for the Premier League trip to Brighton on Saturday was clearly also a priority for Jürgen Klopp. He rang the changes against Atalanta and lost, as Liverpool suffered their first home defeat in the group stage of the competition since losing 3-0 to Real Madrid just over six years ago.

Atalanta, humiliated on home soil when the teams last met, marked coach Gian Piero Gasperini’s 200th game in charge with a fully deserved victory that strengthens their own prospects of qualifying from the group. Two goals in quick succession in the second half, both created from the crossing of captain Alejandro Gómez, punctured Liverpool’s winning streak at Anfield this season.

Appropriately, after a moment’s silence for the late, great Diego Maradona, an Argentinian No 10 from Buenos Aires began proceedings. The man in question, Atalanta captain Gómez, was heavily involved in a determined start from a visiting team intent on making amends for the 5-0 humbling in Bergamo three weeks ago.

They must also have drawn motivation from the team sheet when it landed before kick-off. Klopp had made five changes to the Liverpool team that outclassed Leicester here on Sunday. Mohamed Salah returned after his Covid-19 self-isolation but Klopp’s selection was clearly with Saturday’s early start at Brighton in mind.

Neco Williams and Rhys Williams, two of three teenagers in Liverpool’s team along with Curtis Jones, featured in defence, summer signing Kostas Tsimikas replaced Andy Robertson at left back and Divock Origi was handed a rare chance to impress at centre forward.

Liverpool’s first-half performance lacked any fluency or control as a consequence, although there appeared no mitigating factors as far as Klopp was concerned. The Liverpool manager berated his players throughout the opening 45 minutes and sprinted down the tunnel as soon as the half-time whistle blew in readiness for a few home truths.

A clean sheet at least offered Liverpool something to build on in the second half. And the contest was in desperate need of something. The hosts had one shot at the Atalanta goal in the first half. It took 44 minutes to arrive and sailed high over Pierluigi Gollini’s crossbar from Salah’s right boot after James Milner, Jones and Tsimikas combined to work a Liverpool free-kick into the penalty area.

Salah did create the first chance of the game but with a wayward pass across his own half that fell straight to Atalanta forward Josip Ilicic. The Slovenia international had space to attack Rhys Williams and cut inside on to his left foot, but his effort drifted off target.

Robin Gosens was much closer to opening the scoring for the Italians when released down the left by a lofted ball out of defence from Cristian Romero. With no one making a run into the Liverpool area Gosens elected to go it alone with an audacious, powerful drive towards Alisson’s near post. The Brazilian goalkeeper ensured he was not caught out with a late reaction save.

Gómez drove a yard wide from the edge of the area after Neco Williams had been dispossessed and Ilicic embarrassed himself with a dive, trying to win a penalty, after being tickled on the arm by Georginio Wijnaldum. The big striker screamed in agony after a brush from Wijnaldum’s fingertips. Neither the referee nor VAR were conned.

Klopp gave his much-changed team opportunity to improve in the second half but 13 minutes in he had seen enough. Four substitutes were lined up to come on in the 58th minute but while Roberto Firmino, Diogo Jota, Fabinho and Robertson warmed up on the touchline Atalanta broke the deadlock.

Gómez, the most creative talent on show, was at the heart of it, whipping over a delightful cross from the left after the visitors had built-up play patiently through midfield. Ilicic, reading his captain’s intention perfectly, slid in behind the Liverpool defence to convert on the volley.

Liverpool’s four subs arrived but there was no immediate impact. They were still feeling their way into the game when Atalanta struck again, and from a similar source. Gómez delivered another inviting cross from the left, Hans Hateboer headed back across goal and Gosens arrived unmarked to beat Alisson with a controlled volley from 10 yards. – Guardian