New Killarney athletic track another jewel in the Kingdom’s crown 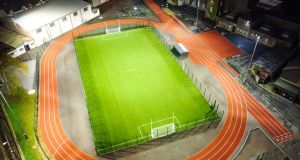 Killarney Valley Athletics Club Arena has been built at a cost of €510,000

Plenty of sporting facilities have been built on the field of dreams premise, and part of the beauty of this one is there’s simply no excuse not to come. Not when it’s as inviting and accessible as the new Killarney Valley Athletics Club Arena.

For a town and indeed county of such famed sporting tradition, the lack of any proper athletics ground in Killarney had long been a sore point, especially for some like-minded members of the club formerly known as Spa/Muckross AC – brothers Tomás and Jerry Griffin chief among them. It was hard enough to stem the flow away to other sports, namely Gaelic football, without having something to offer in return.

Such was their motivation and inspiration for much of the last decade, before earlier this month, only slightly later than originally planned despite the global pandemic, they opened up and turned on the lights of the €510,000 arena, still owing around €120,000, only perfectly delighted the timing was right.

“When Spa-Muckross AC was rebranded about seven years ago, in part to help move it out of just the juvenile area, my brother Jerry already had this idea of building some sort of home for the club,” says Tomás Griffin. “Even if it was just a strip of tartan track, something small.

“What we found was local GAA clubs didn’t want to partner with us, people want to look after their own turf. We just didn’t have any land. Then a chance meeting with the principal at St Brendan’s College, Seán Coffey, who is big into his sport, and we knew from booking a basketball hall to train during the winter, got us talking about partnering with somebody, and he suggested partnering with them.

“So it’s actually on the grounds of St Brendan’s College, where a lot of us had gone through the school when there were no athletics facilities, on a small site where previously there were some old dilapidated basketball courts, and an unused green area. The land is owned by the St Brendan’s Trust, essentially the Diocese of Kerry, and they signed over that section on a long-term lease, to our community group, and we would then design and build the facility.

“Part of the conditions was the facility needed to be available to everyone, beyond St Brendan’s. So all other schools have free access to it, by simply booking their time slot in the day, that’s done through St Brendan’s. Then Killarney Valley AC, our community group, takes over from 5pm every evening, and we have it at weekends, school holidays. So it’s our home, in that we also have to maintain it.

“But this is the heart of the town, literally. Within 500m of the track, there are two primary schools, three secondary schools, and within 2km, another five. So we’ve estimated 3,000 school kids in the town can have free and easy access to this facility.”

Along with other committee members (Jean Courtney, Con Lynch, Bríd Stack, Cathal O’Brien, all similarly athletics-minded) they went about the design: knowing compromise is not a dirty word, there was simply no room for a standard 400m track, so they went for exactly half that distance, ensuring the bends weren’t overly tight.

“We did have to squeeze into a tight spot, but having athletics people making the decisions, everything was built to fit. The 200m track, plus a 100m straight, only with no run off, so we can race 60m, or 80m, which is ideal for juveniles. The 200m-lap is exact so we can race 200m, 400m, 800m, so on, plus there is long jump, high jump and triple jump, and a shot put area off to the side.

“The astro-turf infield will be rented out, because we need it to be self-sustaining, for the maintenance of the facility too. Of that total cost of €520,000, we got €400,000 between various sections, our own fund-raising, a Sports Capital Grant, Leader Funding, also from the Tomar Trust, which takes on community-based activities which are being done for the right reasons.

“We still have that funding gap of around €120,000, but once the track went down in August, and we finally got our insurance in place, we took to opening as soon as we could. In a place like Killarney, tourism has been decimated, and we wanted something to brighten up the town during the winter.”