Teams are now asking themselves - possession or position – which do we need more? 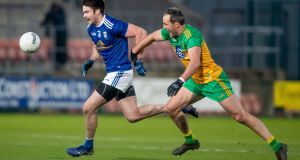 There was a time when goalkeepers kicked the ball out long and courageous players put their bodies on the line to win possession and position for their county. The bigger the moment, the higher they rose and football was exciting and unpredictable.

In their Ulster semi-final win over Down they did likewise, only kicking seven of 22 short that afternoon. In fact, in last weekend’s Ulster final a total of 52 per cent of the kickouts were sent out long, this rose to 71 per cent in the Munster final, and in the Leinster final the figure was 49 per cent. In the Connacht decider a week prior, 64 per cent of the restarts were long.

So in this year’s four provincial finals 59 per cent of the goalkeepers’ kickouts have been long ones. After a near decade of chip restarts, possession football, and a hopeless pursuit of beating Dublin at their own game, a counter movement appears to be emerging. And there’s one man in Cavan who is absolutely thriving as a result.

Thomas Galligan’s importance to the Ulster champions is reflected by their fortunes with and without him. Cavan are -8 for the time he’s not been on the pitch, and +13 with him on it. The Lacken club man started the first two rounds of the Ulster campaign on the bench, his championship preparations disrupted by injury while he also contracted Covid-19 in the weeks prior to the first round.

Against Monaghan he came on for the second half and extra time, he played only the second half against Antrim, but was in from the off in the Down and Donegal victories. Playing with abandon, throwing his body into aerial contests and tackles, Galligan and his Cavan team are a winning contradiction to the modern coaching manual.

The DCU student runs into tackles with the ball in hand and just loves contact. Hardy and strong, without being physically outstanding, he is a lethal combination of honest and inspirational. As well as scoring 0-5, assisting 1-7 (0-5 of which a result of being fouled for a converted free), and winning two marks from opposition restarts – he’s won five marks from his cousin Raymond’s kickouts and all of them have been crucial.

Against Monaghan he won the mark and free which allowed his goalkeeper to score the winner with the last kick of the match. He pulled another from the clouds just after Down had cut the deficit to two points on the stroke of 70 minutes.

Four of those five marks were caught beyond the opposition 65, with Galligan (an underage midfielder) most often coming from the full forward position to catch the ball. So the long kickout is back, albeit it’s not necessarily midfielders who are doing the catching. The new rule for the 2020 season which pushes the kickout to the 20m line is no doubt having an influence too - for the teams with the required personnel at both ends of the kick.

In the Connacht final, Mayo targeted full-forward Aidan O’Shea for a third of their long restarts with him claiming one mark. Galway went towards their centre forward Paul Conroy on nine occasions and he won three marks. Similarly, Tipperary went to Colin O’Riordan in their half forward line for six kickouts last Sunday; he won three marks. While Dublin went long to Con O’Callaghan for three of their first four restarts on Saturday night.

The long kickout mightn’t suit every team as their primary option, but it certainly does for Cavan and Tipp. Both have brilliant goalkeepers with range and strong options to aim for out the field. Even though Cavan only retained possession with seven of their 14 long kickouts against a physical Donegal team, they scored 1-2 from those seven (they won 87 per cent of their long kickouts against Down).

Donegal won 21 of 24 – going short for 17 – yet scored only 0-3 from three times as many possessions. One of which actually coming from a long kickout. Tipperary went long 83 per cent of the time and scored 0-4 from their wins. Dublin prefer the short option to maintain control against lesser opponents - but press them at your peril. They scored 1-1 off long kickouts against Meath. While Mayo’s two goal chances against Galway originated from long restarts.

Kicking into the opposition half also forces a flow of contests and tackles which sets a certain tempo, so long as it's executed with structure and intensity. It changes the terms, from possession and control to fight and risk, and for some teams the latter is a better fit.

Cavan relish the fight and Tipp are unafraid to take risks in possession. Interestingly though, in their respective provincial final upsets, both mixed this approach with restraint in pressing the opposition kickout. Maintaining their defensive shape and forcing the gameplay into the areas they wished.

The Galligan cousins and the long kickout's resurgence will soon face the ultimate test. Dublin in Croke Park. As against Donegal there'll still be a time to kick short and to keep the ball, but only another brave approach will turn workrate and ball winning ability into deciding factors in their All-Ireland semi-final.

Ultimately it comes down to a choice between possession or position – which does your team need more – and then there's players likes Thomas Galligan who can secure both.