Large crowds have gathered in Buenos Aires to pay their respects to late football great Diego Maradona, who will lie in state at the Argentinian presidential palace as part of three days of national mourning. Video: David Dunne 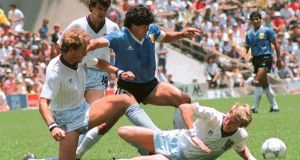 Diego Maradona dribbles past three English defenders during the World Cup quarter-final against England at the 1986 World Cup in Mexico. Photograph: AFP via Getty Images

Sometimes the gods are benevolent and the television commentators fuse with what is happening before their eyes and they find the perfect words. So it was with Jimmy Magee, high above in the Estadio Azteca stadium in Mexico City on June 22nd, 1986, watching Diego Maradona gliding through England’s meaty, plodding defenders, the football running at his feet like a loyal terrier, the watching world falling slack-jawed.

Magee wasn’t so much commentating in that moment as just responding to the football miracle unfolding on the field beneath him. Maradona’s goal must have sent a discernible voltage through that summer’s day and night in every part of the world. He’d produce other moments of mesmerising skill and ball trickery but that moment was his apotheosis: the still point around which the absolute chaos and beauty of his football life would revolve around until Wednesday’s tragic and somehow unsurprising news from Buenos Aires that the boy genius was dead at the age of 60.

It’s hard to convey just how exotic the fact of getting to see a player of Maradona’s legend was in 1986, when live televised sport was rationed out sparingly by the television networks rather than force-fed 24-7.

Anyone with even a remote interest in sport or football then had heard of Maradona before they ever saw him: this international rumour that they had plucked an incorrigible natural from the dust and poverty of a South American city: that Buenos Aires had located its own Pele. The famous clear black and white footage of the stocky, brawny, raven haired youngster betrothed to the ball; the inevitable rise, the arrival in Europe and then this goal, this unanswerable gift, against England.

And it mattered that it was against England. Four years after the Falklands war and the revival of the jingoistic headlines on Fleet Street – “Bring On The Argies” and the fact that his first goal in the quarter-final, the infamous lob using his fisted hand rather than his head to beat Peter Shilton and fool the referee, had left the English smarting with anger. Bobby Robson, a profoundly decent man, would often call Maradona a genius in the years afterwards but could never forgive him for cheating.

That first goal exposed the cultural gulf between the two nations who had engaged in that strange, forced early 1980s war. In England, it went against all accepted rules of fair play. To Argentina, Maradona’s act was an act of stealth and opportunism: a bit of street craft which had hoodwinked the establishment.

The illegality of the goal hung over the match all of four minutes, until Maradona then received the ball in the centre circle, his back to the England goal and then announced that something . . . immortal . . . was on his mind with the lightning, casual turn which left two white shirts as good as dead. And he was off, racing through England, through dreams and into the bloodstream of the watching world. That year, he was the addiction.

Has any country ever loved a son or daughter with the fierce suffocating pride that Argentina loved Maradona? “Our entire country is imported,” wrote Jorge Luis Borges, the revered writer who died just eight days before Maradona scored that goal. “Everyone here is really from somewhere else.”

But that could never have been true of Maradona because it was impossible to separate our idea of him from that country. In that football strip – and Argentina’s may just be the most beautiful jersey of all – Maradona always seemed caught between ecstasy and tears of sadness, as if he had been put on earth just to render explicable the overflow of emotion and feeling that runs through his city and country.

Even when he moved to the colder, more business-oriented football worlds of Spain and Italy, he remained a curio and beyond categorisation. It would be wrong to describe his life as a ‘career’: it resembled, more accurately, a spontaneous combustion after which the audience was free to sift through the remnants for themselves to decide between the outrageous skill and the mere outrages; the glories and the disgraces. His final game for Barca ended with his starring role in a running fight on the pitch involving fans and opposition players. In Italy, they could never forgive him for knocking the national team out of the World Cup in 1990. He could never settle. He could never stop moving.

The appetites for booze, for food, for the Bolivian marching powder, for football, for diversion, the eccentricities like his madcap turn as a television host; his interview with Fidel Castro: he wore all these guises equally, making it clear that they were just as much a part of him as the goals and performances or the endless weekends when he was literally adored by the city of Napoli.

It goes without saying that it is an extremely difficult thing for athletes, particularly ball players who are touched with genius, to feel that superpower beginning to leave their bodies. And it’s remarkable how many almost punish their bodies afterwards. Maradona’s image never changed: the stadium-rock hair style, the flash earring and he matched another 80s icon, Madonna, in his devotion to the crucifix. He stayed instantly recognisable after he retired.

But what would become of him? The people watched, sometimes despairingly, sometimes voyeuristically as Maradona ballooned alarmingly in his early forties and Argentina went into vigil mode when he was almost lost then. He recovered, he had future lapses, he bounced around and by the last World Cup in Russia he was present among us as a kind of superfan, a hyper-charged supporter waving a No 10 shirt in teenybopper devotion to Lionel Messi, who spent the tournament looking burdened by the immensity of Argentina’s football fervour.

And the striking thing, when you see those later images of Maradona, is that his face retained, through the decades of hard living, an innocence.For all the turbulence and the seismic mood swings and the sense that beyond those techno-trance performances on the football pitch he never achieved anything like serenity, there always seemed to be something inherently playful and warm and human in the soul of Maradona. Take me as I am, he seemed to say.

And the world inhaled all of him that it could. In a sad, afflicted year of little joy, the news that Maradona’s light has been extinguished is yet another sombre moment of reckoning. And yet the cat was so irrepressible and such a delight at his best that you can’t really hear the name without having some shining memory.

And maybe you hear, too, that old commentary from Mexico, as the little genius from Argentina wheels away in celebration, over and over, the paint never dry on his masterpiece.

There he goes, leaving half a dozen stricken English men around him in various states of shock and awe. From the cacophony of television commentators around the world comes the Irish contribution.

“Diego Armando Maradona is up on the World Cup pedestal.