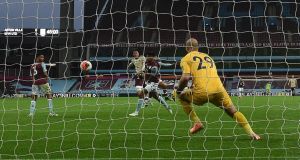 In recent months two Irish athletes were handed very different bans, one in rugby and one in swimming. While the sanctions handed down to Munster’s James Cronin for a failed drugs test may be considered lenient, those handed down to Irish swimmer Robert Powell for a similar offence could be considered heavy-handed. In his column this morning, Johnny Watterson writes that the contrast is striking and could serve as an erosion of confidence in anti-doping policy.

On to soccer and Manchester United last night made it 16 games unbeaten with another very impressive performance away to Aston Villa. Ole Gunnar Solskjær’s side have been on a golden run either side of the Premier League suspension and last night goals from Bruno Fernandes, Mason Greenwood and Paul Pogba sealed the points. Teenage striker Greenwood has been somewhat of a sensation since the league restarted and last night Solskjær said he can go as far as he wants to if he lives his life the right way. Elsewhere, Tottenham turned in another poor performance away to Bournemouth in a drab 0-0 draw while, in the Championship, Leeds took further strides at the summit with a 5-0 win over Stoke.

1 Covid-19: Cabinet looks to tighten travel restrictions and decide on pubs reopening
2 Dún Laoghaire home of renowned acting mentor Betty Ann Norton for €1.5m
3 David Trimble: After the big dinner in Oslo, somebody said why don’t we party together?
4 Vicky Phelan: ‘I hated being a mother – I would have gladly walked away from it’
5 Five Covid-19 clusters found among Irish fruit and vegetable growers
6 Why are there so many angry dads?
7 Seamus Mallon: I saw John Hume’s raw courage as he faced troop of bloodthirsty Paras
8 Fintan O’Toole: Supreme Court has called time on government waffle
9 Coronavirus: Warning against blame game as 46 more cases are confirmed
10 Netflix: 10 of the best new shows and films to watch in August
11 Fine Gael Senator is threatened with violence on social media following canvassing post
12 Is that concealer you’re wearing, Mr President? The rise of men’s makeup
13 Tony Blair: John Hume was a visionary titan who helped shape my politics
14 Most workers now expect ability to work from home part-time
15 Social worker overcomes poverty to graduate with master’s degree
16 Coronavirus experience shows how Greece’s weakness is its sunshine
17 More than 40% of help-to-buy recipients already had deposit
18 John Hume obituary: Nationalist leader who championed ‘agreed Ireland’
19 Not for the birds: Keep your blueberries for these delicious oat slices
20 24 hours in Bundoran: ‘The town is mental. No one expected it to be so busy’
21 ‘I’m pretty sure that if I had been somewhere else they would have just let me die’
22 Tributes to John Hume flood in from Irish and international politicians
23 Owner of Dundrum Town Centre to sell prized assets
24 ‘I’ve had my butt kicked for the past three years’: Jamie Oliver on fame and failure
25 Maureen Dowd: The US president and the damage done
26 ‘Somalis are the Irish of Africa’: Irish man helps rebuild Somalia’s rule of law
27 John Hume, architect of peace process, dies aged 83
28 Ethics watchdog backs staff called ‘lazy’ by FF’s Marc MacSharry
29 DUP’s Brexit ads: Who bankrolled the secretive £435,000 campaign?
30 Cholesterol-lowering drugs may not have much benefit, review finds
31 Biden attacks Trump over ‘bald-faced lies’ about voting by mail
32 Has Britney Spears really been judged incompetent to vote?
33 More than 40 test positive for Covid-19 on Norwegian cruise ship
34 Misconduct claims in Department of Transport spark Garda inquiry
35 James Ryan injury could open the door for Ryan Baird
36 Niall Quinn and Brian Kerr differ on role of outsiders in FAI
37 Different Strokes: Bryson DeChambeau’s rules debates doing him no favours
38 Gerry Thornley: Irish system to face its acid test in front-loaded return
39 Phased reopening in German schools as classes judged unlikely Covid-19 hotspots
40 John Hume: A life in quotes
Real news has value SUBSCRIBE