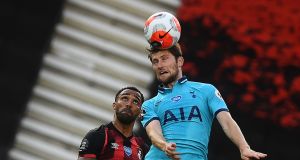 In the last few days José Mourinho has been irked by everything from the Football Association’s decision-makers to a social media post by Arsenal mocking Tottenham’s Hotspur’s struggles but, aside from being denied an early penalty here, he was fortunate not to leave Bournemouth empty-handed.

Bournemouth had two goals disallowed late on, with replays showing Callum Wilson’s acrobatic finish had a helping hand from Joshua King before beating Hugo Lloris in the Tottenham goal. Moments earlier, King headed in a Junior Stanislas cross but was ruled offside.

The second half was overshadowed by a sickening clash of heads between Adam Smith and Ben Davies, with the former suffering concussion and requiring oxygen after nine minutes of treatment from nine medical staff before being carried off on a stretcher.

Bournemouth responded by continuing their flow and carving their best openings through King and then Wilson, who shrugged off Jan Vertonghen before hooking the ball goalwards and wheeling away in celebration, only for the referee, Paul Tierney, having communicated with those back at Stockley Park, to halt their joy when the music stopped. Eddie Howe had his head in his hands in disbelief but Bournemouth’s belief was clear and they crafted another opening into 12 minutes of second-half stoppage time, but Harry Wilson failed to beat Lloris one-on-one.

On another day Mourinho would probably have marched down the tunnel to accompany the referee at half-time. The Tottenham manager was incensed by the failure to award his team an early penalty when Harry Kane was sent tumbling in the box by King, who was guilty of shoving the striker, lurking at the back post at a corner, as he went to meet the ball.

Mourinho’s glare said it all, incensed that the push gained the approval of both Tierney and the video assistant referee, Michael Oliver, and, as it happened, Bournemouth survived the early fright to ascertain their grip on proceedings. Tottenham were turgid in victory over Everton on Monday and they badly struggled to convince here, too often languid in possession.

Mourinho has bemoaned his side’s unpredictability, with hit and miss displays in danger of denting their hopes of earning European football next season and, by half-time, the Portuguese, who spent the interval entrenched in the away dugout, had seen enough, introducing Son-Heung min and the lesser-spotted Tanguy Ndombele in place of Giovani Lo Celso, who required treatment on an ankle injury, and Steven Bergwijn. Tottenham’s players arrived prematurely for the second half, while Bournemouth had every right to be encouraged by the gusto and aggression they showed in the first half.

Bournemouth played with an urgency that was non-existent in defeat to Crystal Palace and Newcastle here but played with a tempo that unsettled Tottenham and, while chances remained at a premium having managed just five shots on target across their previous four matches, Stanislas forced Lloris into a smart save low down to his right on the brink of the break.

Callum Wilson returned with a spring in his step after a two-match ban, while Bournemouth’s substitutes reacted like paying supporters, applauding every interception and block, with the midfielder Dan Gosling particularly impressive on his first start since February. Tottenham toiled, huffing and puffing in possession, their insipidness typified by Harry Winks waywardly passing out to Son, warming up on the touchline, instead of Davies.

Tottenham struggled to penetrate a fragile Bournemouth defence – only Aston Villa and Norwich have conceded more league goals this season – and Kane was required inside their own six-yard box, heading clear to erase the danger at a corner after Jefferson Lerma connected at the back post from a deep Diego Rico cross.

Lloyd Kelly again impressed at centre back after keeping his place alongside the ever-reliable Nathan Aké but the Bournemouth left back Rico went unpunished after dangling a leg at a dangerous Serge Aurier cross in the opening minutes. The marauding right back provided Kane with a whiff of goal midway through the second half, only for Aké to intervene, but that route seemed Spurs’ best chance of striking. Aurier steamed down the right and located Erik Lamela, who, stretching to meet it, headed narrowly wide.

The injury to Smith, which came moments after he was winded by a Kane free-kick, allowed both teams to rest, with Howe urging his team to re-focus and not undo all of their hard work. As for Tottenham, they readied Lucas Moura who arrived off the bench in place of Moussa Sissoko. But with Dele Alli again absent with a hamstring complaint, Spurs sorely lacked a spark.

Tottenham were off-colour and continue to meddle in mid-table, while this point stops the rot for Bournemouth after five successive defeats and moves them to within three points of Watford, who boast a superior goal difference. – Guardian