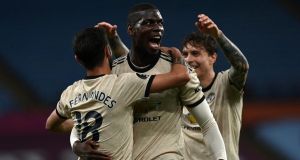 Dean Smith called his strikers into a video session this week to show them how to run smarter and finish sharper. Then Mason Greenwood gave them a demonstration of his own at Villa Park, scoring a goal of rare class to propel Manchester United closer to the top four and deepen Aston Villa’s relegation woes.

Paul Pogba crowned the scoring with another immaculate finish. But although United swaggered to victory in the end, Villa were entitled to fume about the way the visitors took the lead, as Bruno Fernandes began the beating with a contentious penalty. Villa must turn their minds quickly to Sunday’s clash with Crystal Palace, which could be critical to their survival hopes. United, meanwhile, have moved to within one point of fourth-paced Leicester.

This was United’s game in hand on the teams above them and there was no good reason to suspect they would fritter it away. Their defence has not been fully repaired despite the side’s attacking resurgence but Villa hardly seemed like a team who could punish their flaws. Smith’s side had tightened up since lockdown but their problems now are at the sharp end.

The three strikers available to Smith had scored one Premier League goal between them in their careers; United fielded an 18-year-old who scored double that amount in his last game alone. And in addition to Greenwood, the visitors deployed Marcus Rashford, Anthony Martial, Fernandes and Pogba, a parade of attacking talent that might have had Villa fans wincing in anticipation from behind their sofas. Those fans’ humour was hardly uplifted when Bournemouth’s draw with Tottenham meant Villa sank a place in the table even before kickoff.

If there is one Villa player with the quality to be classed alongside United’s luminaries, it is Jack Grealish. But that diamond had not sparkled since the league’s restart, turning in a series of honest but ashen displays. Villa hoped he would regain his lustre here. United would keep a close eye on him too, Ole Gunnar Solskjær perhaps trying simultaneously to stifle him and appraise him.

Grealish was given freedom to conjure just behind Mbwana Samatta, the lone striker selected by Smith. Villa, recognising their plight, showed commendable aggression, pressing high and hard from the start. Anwar El-Ghazi fired off their first shot in the third minute. It was a harmless effort from 20 yards but an encouraging show of intent.

United had already threatened by that stage, but Greenwood lost his footing after a flicked pass by Fernandes. But that was as menacing as United got in the early stages during which Villa upset them with a welcome show of devilment, as well as clever probing by Douglas Luiz, in particular.

Grealish got a chance to make his mark in the 17th minute when Ezri Konsa flighted a cross from the right to beyond the back post. Grealish ran on to it failed to steer his volley on the target from seven yards. United escaped again in the 25th minute when Trezeguet struck a post from 20 yards.

Just as Villa seemed set to get on top, their opponents were given an easy chance to put them down. That has happened too often this season. This time, though, little blame could not be assigned to Villa unless one agreed with Jonathan Moss’s interpretation of Fernandes’s fall in the box in the 27th minute. Unfortunately for Villa, the person with a variety of views, VAR official Graham Scott, did agree with the referee that Konsa had brought the United player down. Fernandes got up to send Pepe Reina the wrong way from the spot.

That deflated Villa and had the opposite effect on United. Reina denied Greenwood in the 35th minute. Then Fernandes missed a header from close range. And then, just before the break, Greenwood scored a remarkable goal. Receiving a pass at the edge of the area he instantly shifted the ball on to his right foot and lashed it past Reina with the power and precision of an expert finisher.

Aaron Wan-Bissaka was not so deadly moments after the resumption, when he did well to get on the end of a cross by Marcus Rashford but headed wide from close range. Villa, though, already looked beaten. Pogba confirmed that in the 57th minute with another polished finish. Fernandes picked him out at the edge of the D with a well-aimed corner, and the Frenchman curled a perfect shot around a forest of bodies and into the bottom corner of the net. Reina did not realise what was happening until it was too late.

Things threatened to grow worse for Villa. Martial rammed a shot off the crossbar after more good service by Fernandes. – Guardian