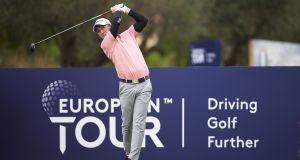 Gavin Moynihan carded a bogey-free 69 in the first round of the Austrian Open. Photograph: Aitor Alcalde/Getty Images 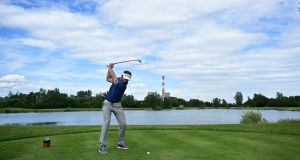 Joost Luiten of the Netherlands tees off on the 10th hole during the first round of the Austrian Open at Diamond Country Club in Atzenbrugg. Photograph: Stuart Franklin/Getty Images

As restarts go, Gavin Moynihan hardly put a foot wrong. The 25-year-old Dubliner posted a bogey-free 69 in the opening round of the Austrian Open at the Diamond Country Club outside Vienna, as the European Tour – shut down for four months – got up and running again.

Course specialist Joost Luiten, from the Netherlands, reaffirmed his liking for the course built on an abandoned petro-chemical industrial site with a superb 65 to claim a one-stroke lead over Scottish duo Craig Howie and Marc Warren, while veteran Miguel Angel Jimenez rolled back the years to be among those grouped three shots behind the Dutchman.

Moynihan – playing his first competitive round since missing the cut at the Dimension Data tournament in South Africa last February – had shown good form recently in sharpening his game, firing a 58 on the Corballis links close to home in Donabate, while further fine-tuning took place in Co Kerry where he played Ballybunion, Tralee and Waterville.

A hot streak mid-round provided the foundations for Moynihan’s 69, with birdies on the seventh, eighth and 11th holes, to get inside the top 20 after the first round. However, Robin Dawson had a difficult day in signing for a 76 while Niall Kearney struggled to a 78, both facing an uphill battle to survive the 36-holes cut.

The Austrian Open – the first tournament to be played on the European Tour since the Qatar Masters in early March – once again saw Luiten hit the ground running. A champion in 2013 and with top-10 finishes on his last four appearances, Luiten started with five birdies in his opening seven holes. His lone bogey came at the 11th but he finished strongly with birdies at the 15th, 17th and 18th holes to claim the outright lead.

“I have got good memories of this course. It is good to come back after a four months break and have my game in order, a lot of guys didn’t know where they stood. It’s good to have a fast start. You’ve got to keep the mistakes off the card because it is a tricky golf course if you are out of position,” said Luiten, who observed the break hadn’t led to any rustiness. “Tournament golf, you don’t lose it. You have got to stay focused and stay patient and just play your own game.”

LEADERBOARD
Britain and Ireland unless stated, par 72, (a) denotes amateur:

1 What next for green jersey hero Sam Bennett after toughest of Tours?
2 Live TV coverage of all Premier League games likely to continue into October
3 A kick in the teeth for sports, and a nail in the coffin for communities
4 Suarez’ Italian language exam rigged according to prosecutors
5 Born to ride, born to win: Sam Bennett, the making of a green machine
Real news has value SUBSCRIBE