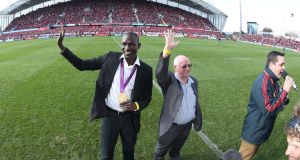 Impossible as it is to pinpoint the moment when Kenya converted into a properly global powerhouse in distance running, the first World Junior Athletics Championships, staged in Athens in July of 1986, still stands proudly along the timeline.

Kenya was already mapped with select Olympic champions and world record holders, namely Kip Keino and Henry Rono, only without any system or structure in underage athletics. The Kenyan team was entrusted to Colm O’Connell, the Irish Patrician Brother who had already begun to nurture some success among the distance runners at St Patrick’s High School in Iten, deep in the heart of the Great Rift Valley, where he’d first arrived a decade earlier at the age of 28, originally from Caherduggan, near Mallow, in Cork.

O’Connell selected nine runners, seven from his own St Patrick’s school, and to his own considerable surprise Kenya came home with nine medals, including four gold, and finishing fourth on the overall medal table, behind East Germany, the Soviet Union, and the United States. It wasn’t long before that same game changed on the senior stage.

“The first night, the first final was the 10,000 metres, to be the first-ever World Junior champion,” later O’Connell recalled in an interview with this newspaper. “We had a boy called Peter Chumba, he ran bare-footed. He won. That was the first time I thought, ‘Our success has gone beyond Iten.’”

The silver medal-winner in the 1,500m in Athens was Peter Rono. Two years later, at the 1988 Seoul Olympics, that same Peter Rono would become O’Connell’s first Olympic champion. The rest is Kenyan distance running history, O’Connell’s name strongly linked to another five Olympic champions, and at least 25 World Champions. No one is really keeping count or score, least of all himself.

Impossible as it also is to briefly surmise his coaching success and achievements in the 34 years since Athens, the words of Wilson Kipketer, the Kenyan-born 800 metres runner O’Connell coached from the proverbial nowhere to win four World titles and four times break the world record, indoors and out, came pretty close.

“I would say it’s the mental set of knowing ‘what is running?’, ‘what is it to do this sport?’ It’s not about winning, but to enjoy to be there every morning, or every evening, running on the grass, without shoes, so this is why he means a lot to the young generation, and he means a lot to me too.”

Kipketer spoke these words at the waterfront Grimaldi Forum in Monaco last November, when presenting O’Connell with the World Athletics Coaching Achievement award for 2019, and for good reason: since first beginning that missionary trip to Iten in Kenya in 1976, O’Connell has indeed helped convert a nation into distance runners, and 44 years later, at the age 72, he still is. Last summer, he coached Rhonex Kipruto, aged just 19, to the bronze medal over 10,000m at the World Championships in Doha, before Kipruto came out in January of this year and ran a world best of 26:24 for 10km on the roads.

O’Connell’s coaching philosophy has never been just about the winning, although he’s done plenty of that: along with Rono, he nurtured Matthew Birir, Olympic 3,000m steeplechase champion in 1992, two more Olympic steeplechase champions in Reuben Kosgei (2000) and Brimin Kipruto (2008), before one of his most famous students, David Rudisha, became the regaining world 800m record holder with his 1:40.91 and a back-to-back Olympic champion.

For O’Connell it’s always been more about continuing to nurture and inspire the next generation of Kenyan distance runners, and no one has done that better, or more often. They don’t call him the Godfather of Kenyan running for nothing.

When he arrived he had no experience of athletics, but the school track coach, Peter Foster - brother of Brendan, the outstanding British distance runner of the 1970s - insisted on recruiting him as his assistant. To say, even now, that the facilities are unsophisticated is an understatement; back in those days, the school had no electricity or running water. And after a year, Foster handed O’Connell his stopwatches and the athletics job and returned home.

O’Connell conceded that he was so fresh, he “had no fixed ideas about training” and that this may have been a good thing because he was intent on adapting his coaching to “suit the Kenyan mentality”. He has often joked that one of the reasons for his success is that he stuck around long enough, although anyone who has come to find the “secret” of his success is promptly told there is none.

“I’ve always said that every runner that comes along is different,” he has also recalled. “They all have different personalities, and they all have their own different ways of doing things. But there are different levels of expectation and performance now than before. Peter Rono won an Olympic gold medal from here, but the sport has moved on since so much. The whole professional era was only beginning then. How the athlete copes with that is important.”But the basic coaching approach hasn’t changed much over the years. You refine the methods, of course, and adapt them to different athletes.”

O’Connell still lives in the thick of the Kenyan athletics scene, in a small house in the grounds of St Patrick’s High School, where he taught for 17 years (including seven as headmaster). It was partly because of his success at St Patrick’s that Iten, perched at 7,875ft on the western escarpment of Kenya’s Great Rift Valley, earned its reputation as being “The Home of Champions” - and many overseas athletes still go to live and train there to seek improvements in their own distance running.

It’s also impossible to talk about Iten now and not deny the dark cloud that hangs over so much Kenyan distance running, and the damage done to the reputation of a growing number of former champions all through the needle of doping. O’Connell is not denying this either, and the continued tarnishing not only of Kenyan distance runners - some 45 Kenyan runners now banned for doping offences of some sort - but all those involved around them.

“Yes, it’s massively damaging,” O’Connell said last year in Monaco. “And unfortunately they keep ticking over, an odd guy getting done again, and even if mostly individual cases, that is certainly damaging to the image, and I suppose how the average person in the street sees Kenyan athletics now.

“It is still a small section, but that’s enough to damage all of Kenya, and cast a doubt on everybody. And unfortunately we don’t seem to be able to nail the thing down. Who is responsible? Where is it coming from? Where are these people getting whatever? With the result everybody gets tarnished.

“When you don’t have specific athletics or groups either being proven guilty or coming forward saying ‘this is the way...’ But I think the athletes, regardless of who they are, must take some responsibility. No athlete can be that naive to sit by and watch themselves be doped, not ask the question, and then say ‘I didn’t know’.”

None of O’Connell’s athletes have ever been directly linked to doping, and although he has reason to feel the hurt of the recent tarnishing, he continues to convert the nation, all the while maintaining an unwavering low profile and modesty

Ask him about his lasting legacy and he’s more likely to say the way he helped change the face of Kenyan women’s distance running, breaking down that barrier by also nurturing runners from the nearby Singore Girls School, and bringing the likes of Sally Barsosio, Rose Cheruiyot and later Vivian Cheruiyot to the world stage for the first time.

At his training camps which still run out of St Patrick’s High School, he typically has 50 young athletes under his wing, evenly split as 25 boys, 25 girls, along with around five seniors. O’Connell also remains an interested and engaging student of his own sport, and the many personalities within it. His real skill, he always said, is not as a technical coach, but in spotting and polishing the right people. His mission, however, has long since been accomplished.

1 Sligo meeting abandoned after four races due to safety concerns
2 Rory McIlroy steadies the ship after shaky start at US PGA
3 Andy Farrell admits Ireland net may need to be spread wide in the autumn
4 McIlroy and Lowry in the mix at US PGA; Farrell knows Ireland will need to adapt
5 Real Madrid crash out to relentless Manchester City performance
Real news has value SUBSCRIBE