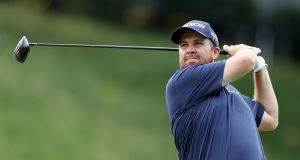 Shane Lowry opened with a three-under 69 at the Workday Charity Open at Muirfield Village in Ohio. Photograph: Rob Carr/Getty Images

Shane Lowry recalibrated during his week’s break, and brought a bit more fizz to his game in the opening round of the Workday Charity Open at Muirfield Village in Ohio where a stunning approach shot from 244 yards to four feet to set up an eagle on the Par-5 seventh hole provided the highlight of a three-under-par 69.

The British Open champion – who’d missed two of three cuts in rebooting his season in the past month – was much sharper for the first of back-to-back tournaments at the Jack Nicklaus-designed course, although the green speeds of 11 on the stimpmeter for the Workday are expected to be ramped up to 13 for next week’s Memorial tournament.

Lowry’s 69 left him four shots adrift of first round leader Collin Morikawa who signed for a 65 to lead by one from Canadian Adam Hadwin.

Graeme McDowell also enjoyed a good opening round as he got to five under before bogeying his final hole and settling for a round of 68 to sit three behind Morikawa.

For Lowry, the putter – the primary issue for his misfiring in missing cuts at the Colonial and again at the Heritage – was more obedient in a round of an eagle, four birdies and three bogeys, all of which came from missing the green with approach shots.

Lowry, who started on the 10th, had birdies at the 11th (three feet) and 16th (from 18 feet) to go with bogeys on the 14th and 17th.The Offalyman upped his game on his homeward run, chipping in for birdie on the second and responding to a bogey on the fourth, where he was bunkered with his tee shot to the Par 3, by rolling in a six-footer for birdie on the fifth and then hitting that exquisite approach to the Par-5 seventh to set him his eagle.

Jon Rahm, who has the chance to leapfrog Rory McIlroy to the world number one spot with a win, opened with a 72.

Morikawa, making his debut at the Muirfield Village Golf Club, would have enjoyed a two-stroke lead but his putt on 18 came up agonisingly short and he was forced to settle for his lone bogey of the day. But he wasn’t discouraged by how his round ended.

“It happens, I think it was just slight fatigue,” he said. “If I look at the entire day it was very consistent and I can take a lot of positives heading into tomorrow.”

One shot behind is Hadwin whose only win on the PGA Tour came at the 2017 Valspar Championship and the 32-year-old Canadian maintained his good form from the Rocket Mortgage to get off to a fast start, even if his philosophy was to ease into the tournament.

As he put it: “I’m a firm believer in easing myself into weeks and getting more aggressive as that goes along, as you sort of build some comfort with the golf course and with how you’re swinging and stuff.

“It’s still a tough golf course, no matter how soft it’s playing, it can sneak up on you. You get too aggressive, you miss a couple balls, you’re scrambling for pars and you can sort of kind of just get off kilter. I’m not a fan of that in the first round. It’s fairways and greens and make it as easy as possible.”

Hadwin’s disciplined and patient approach certainly reaped dividends in his opening round, which again was played in an unnatural quiet with no fans.

Rather curiously, the PGA Tour allowed three players who had tested positive for Covid-19 – and continued to test positive – to resume tournament play: Nick Watney, Denny McCarthy and Dylan Frittelli were grouped together as the tour followed the US CDC’s guidelines for return to work. However, opening rounds of 73 from McCarthy and Frittelli and a 77 from Watney mean all three have uphill battles to survive the cut.

“Firstly, I’m happy to be playing golf again. I wasn’t sure how long it was going to take to get over everything and get back on the course. I’m super happy to be playing again,” said South African Frittelli, who described the comeback while still testing positive as a “little tricky situation”.

He expanded: “I spoke to my physician and quizzed him on how it works, and he said, ‘oh, there’s a chance that you could be testing [positive] for up to a month’. I’ve got a friend in Japan who chatted to me and he said, ‘dude, I’ve been testing for 28 days, I still haven’t got a negative’ . . . . the CDC guideline, it’s 10 days from the first symptoms or a positive test, and that’s pretty much the full cycle of the virus. If you don’t have any symptoms on day 10 and you’re perfectly healthy and you’re not showing any declining conditions, then you’re free to go back to work.”

The course at Muirfield Village is set to firm up and the greens to speed up for next week’s Memorial tournament on the same course, where Tiger Woods will make his first start since the PGA Tour’s return. Woods confirmed he would tee up next week in a post on social media. “I’ve missed going out and competing with the guys and can’t wait to get back out there,” he said.

Serena Williams beats sister Venus at Top Seed Open 09:42
Australia’s limited overs tour of England gets the all clear 09:21
Rugby to return in England with rucking but no hugging 08:15
First pro rugby player in Ireland tests positive for Covid-19; Leipzig into final four 07:44
Prospect of magic number proves elusive at Wyndham Championship 07:08
Here is your handy guide to sport on television this week