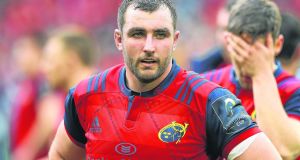 James Cronin: the one-month ban he was given meant there are virtually no lasting consequences. He was back playing rugby with Munster on May 16th and sat out the suspension during a period there was no rugby played. Photograph: Lorraine O’Sullivan/PA

Two years ago an article in the International Journal of Sport Policy published a paper headlined “And Justice for All? How Anti-Doping Responds to ‘Innocent Mistakes’.” The study took a look at how athletes are punished when they commit anti-doping offences.

It piqued interest this week because in recent months two Irish athletes were handed very different bans, one in rugby and one in swimming.

James Cronin last November tested positive for two banned corticosteroids and was given a one-month suspension during a pandemic, meaning he would miss no competitive rugby.

Irish swimmer Robert Powell was banned for 12 months after failing a doping control test, also last November. The 20-year-old had Clostebol, a prohibited substance, in his system.

With both athletes it was accepted that they had the banned substances in their bodies by accident and that there was no attempt to use those agents to enhance their performances on the field or in the pool.

That’s where the study comes in. The World Anti-doping Agency (Wada) includes, as part of its mission statement, the aim to develop policies that reflect justice, equity and integrity. However, it was said that current policies and procedures for the sanctioning of athletes subvert legal maxims, such as the presumption of innocence, and punishment for all offenders, even in cases of accidental or inadvertent doping where there was neither intention, nor any performance enhancement.

Furthermore, it was suggested that the introduction of a ‘reasonable person’ standard might help to prevent the imposition of sanctions in cases where even anti-doping tribunals acknowledge that sanctions are harsh or unfair.

It is argued that, under the current system, athletes who deny having committed an anti-doping rule violation have little to no possibility of proving innocence. Furthermore, it says that athletes who persist in denying they took banned substances will be ridiculed and in these cynical times the only thing worse than a ‘doping cheat’, is a ‘lying doping cheat’.

Data reviewed in 40 anti-doping cases involving tennis players taken from the five-year period 2003-2007 (Pluim 2008), found that in only 13 of the 40 cases was a prohibited substance taken to enhance performance. In all the other cases (67.5%) it was accepted at the independent hearings that there was no intent to enhance performance (19 cases) or no (significant) fault or negligence (eight cases).

In the two recent Irish instances this was indeed the finding. Cronin, who was prescribed the antibiotic Amoxicillin by Munster team doctor Jamie Kearns, was given Prednesol in error by a Cork pharmacy. Antony Davies, the independent judicial officer, stated the doping violation could have been avoided if Dr Kearns and Cronin had better “safeguards” in place. One of those safeguards meant that an athlete should always read what is in on the label very carefully.

Davies concluded that the international player “bears at least some fault”. The IRFU felt the sanction was “sufficient due to strong mitigating circumstances.” Cronin’s one-month ban was for an “unintentional anti-doping violation”.

DCU student Powell said he had been using a cream to treat eczema but had inadvertently used cream from a similar looking tube that contained the banned substance. Because of that error he mistakenly applied the cream Trofodermin, as opposed to his intended cream of Denvercort, with Trofodermin known to have Clostebol in its composition.

Furthermore Powell’s blood content level of Clostebol supported the findings that the ingestion was not intentional. Sport Ireland’s inquiry found that Powell had no “significant fault or negligence” and accepted his explanation of how the substance entered his system.

In other words, both athletes violated an anti-doping rule but neither of them were deemed to have committed the act of doping itself. However, the rules do not allow for nuanced assessments. The sanction usually suggests the severity of the breach. So, even if an athlete can demonstrate that a substance was ingested inadvertently, and provided literally no performance enhancing effect, they are still guilty of doping.

That makes the sanctions imposed on Cronin and Powell more puzzling to comprehend, while the disparity of the effect they had on the careers of both athletes is troubling. How this aligns with WADA’s stated aims is perplexing.

For Cronin, there are virtually no lasting consequences. He was back playing rugby with Munster on May 16th and sat out the suspension during a period there was no rugby played.

For Powell, his suspension means he has missed out on a substantial period of preparation in his hope of qualifying for the Olympic Games next summer. He was part of the Irish 4 x 200 metre freestyle men’s relay squad that set a new Irish record at the last World Championships in Korea. The team have to be ranked 12th or better to get to Tokyo 2021.

Notwithstanding the obvious disconnect between accepting that an athlete is not really a doping cheat, yet must still be punished, the corollary surely must be that when they are punished the sanctions must make sense.

There is only one way to look at the two cases and people will fall on either side. Either Cronin's suspension, which satisfied EPCR, the rugby body that governs the Heineken Cup, was much too lenient or Powell’s sanction following a Sport Ireland inquiry was far too harsh. Either way the result is likely to be an erosion of confidence of those important words justice, equity and integrity.

Lewis Hamilton claims pole position in Barcelona 15:42
Dublin SFC match called off due to positive Covid-19 test 15:34
Mikel Arteta given more control at Arsenal as Raul Sanllehi leaves 14:17
As ever, Ronnie O’Sullivan sparks debate at the Crucible 15:37
‘Historic humiliation’: Spanish press reacts to Barca drubbing 12:39
Here is your handy guide to sport on television this week