National officials reiterate any complaints received will be vigorously pursued 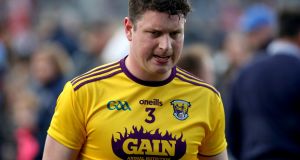 Liam Ryan: looks set to miss out on the Wexford county hurling championship due to a stress fracture in his foot. Photograph: Bryan Keane

So far the GAA has not received any complaints from clubs protesting at unauthorised activity by county teams. Any club with such issues had been invited last weekend to contact Croke Park directly with details of the breach.

National officials do however emphasise that any complaints received will be vigorously pursued.

Speaking on Thursday, Feargal McGill the GAA head of games administration, said that as far as he was aware there had been no complaints.

“To the best of my knowledge, none. It wouldn’t be coming directly to me but I presume I’d be told about it straightaway,” he said.

He doesn’t believe that the problem is as widespread as supposed but says that recent statements from Croke Park were important as reassurance for clubs who feel that they are being disadvantaged by county managers.

“Look I don’t want to be dismissive of club concerns. It’s still a good mechanism if a club is really annoyed and decides, ‘we’ve had enough of this’. If we do get a complaint it will be taken exceptionally seriously because if a club goes so far as to make a complaint, well then we have a problem.”

Having initially announced that the GAA would not pursue breaches of the ban until September 14th on collective training, the association convened a meeting of county chairs last Friday to announce that it would now invoke Rule 7.2 (e) to deal with the situation.

This covers ‘Misconduct considered to have discredited the association’ and carries punishments ranging from the suspension of individuals and units, fines, disqualification and expulsion from the association.

It is expected that the issue will subside in the immediate future as club competitions return to action in the coming week, from Friday 17th, with county players involved.

There was though controversy in Wexford this week, as Rapparees manager Padge Walsh told Wexford Today that their All Star nominee defender Liam Ryan had “picked up an injury doing something with the county team”.

This was denied by the county board and the club is believed to be taking the matter no farther but the player looks likely to miss the county championship with a stress fracture in his foot.