Copenhagen to Adelaide - Your sporting guide to the weekend

There are four Ireland teams in action in the coming days plus tennis, darts, GAA, golf and cycling 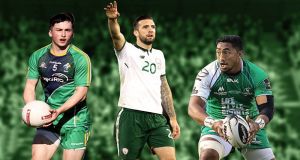 I presume no one is referring to this as a case of model behaviour by the organisers?

Nope, tennis chiefs were forced to issue an apology after the draw for the inaugural tournament was branded a ‘disgrace’. Players – they’re the top eight under-21 stars according to the ATP Tour rankings – picked between two models and walked down a runway arm in arm with them, before the models decided the groupings of four players in each by revealing letters hidden under their clothing.

One model took off her jacket to reveal the letter B on her back, while Denis Shapovalov discovered he was in Group A when his chosen model pulled up a lace dress to reveal the letter A on her right thigh. South Korea’s Hyeon Chung was asked to pull a model’s glove off with his teeth.

So how well did they grovel?

A joint statement from the ATP and sponsors Red Bull read: “Our execution was in poor taste and unacceptable.”

Anyone satisfied at the outcome?

Maybe one of the participants Russia’s Daniil Medvedev whose faux pas earlier in the year was superseded by events in Milan. He was fined $14,500 for insulting Portuguese umpire Mariana Alvez twice and for throwing coins at her chair at the conclusion of a second round match at Wimbledon last summer.

Is this where they ‘haves and have nots’ of darts come together in a competitive environment?

The tournament combines the PDC and their academy the BDO (disclaimer: it’s not really their academy, it just seems that way due to the number of players that jump ship when given the opportunity to swap the BDO for the riches of the PDC).

So what’s the format?

Nine days, 32 players, eight groups of four with the top two in each qualifying for the knockout stages all played out before adults behaving like children.

Will Mighty Michael van Gerwen be keeping his thumbs to himself?

The two-time reigning champion hopefully won’t be caught texting during a break as he did in the World Matchplay at Blackpool. He sent a message to fellow Dutch player Vincent van der Voort which read: ‘Bye, bye, Whitlock’ (Australian star Simon Whitlock), whom Van Gerwen was playing at the time. Phil Taylor not only called Van Gerwen ‘stupid’ for doing so but thrashed him 16-6 in the next round.

Any stat to bamboozle everyone down the pub?

A BDO player once won the tournament. His name, Scott Waites.

Isn’t it great the way the rugby community has turned into a pen pal fraternity with all the letter writing?

World Rugby will be grateful that matches will command the focus this weekend, rather than the bout of letter writing that has accompanied a report by their Technical Review Group to recommend that South Africa should host the 2023 Rugby World Cup.

France and Ireland were very unhappy that their respective bids were marked less favourably in certain categories and made those feelings both plain and public and have now become pen pals with all 39 voters that will determine which country gets to host the 2023 Rugby World Cup in London on November 15th.

So it could be a feisty encounter between Ireland and the Springboks?

Maybe in the committee box but I’m not sure there’ll be much trash talking about which country gets the 2023 World Cup on the pitch. The players will have enough to be getting on with.

So what about the match? Ireland start as favourites and head coach Joe Schmidt will be hoping that the team can find a way past the Springboks, whose last performance in the Rugby Championship, a one point defeat to New Zealand, allowed the fug of previous disappointments to lift. Ireland lost 2-1 last year in a three Test series in South Africa. The pick of the rest of the Test matches is the clash between France and New Zealand on Saturday night for the Dave Gallaher trophy, the former All Black captain who was born in Ramelton in Donegal.

Isn’t this a great time of year for the club game, wet muddy pitches with just a hint of ice?

There are 10 provincial club matches on this weekend with nine on Sunday and today’s Donegal v Derry clash.

Yep after the women’s team won the All-Ireland club camogie title, the men lost an the club hurling semi-final to eventual winners Cuala and the football final to Dr Crokes.

What about the battle of Aughrim on Sunday?

Wrong Aughrim, the one you’re referring to was a battle in 1691 that took place in Galway but reigning All-Ireland champions St Vincent’s take on Rathnew in Aughrim, Co Wicklow. There are four quarter-finals in Leinster, two semi-finals in Munster and Connacht and an Ulster semi-final between Derrygonnelly and Cavan Gaels, all football matches and all on Sunday.

Weren’t Ireland delighted to draw Denmark, they must be very confident?

They might not be as chipper now as James McCarthy and Jon Walters are out through injury, David Meyler is suspended for the first leg and Jeff Hendrick and Stephen Ward face late fitness tests.

So what’s our competitive record like against the Danes?

Beautifully balanced, each country has won three matches apiece and five have been drawn. The Republic of Ireland’s other two victories came in friendly matches.

Is there any good news?

Well if you’re a Republic of Ireland supporter travelling to Copenhagen the fact that some publicans in the Danish capital have agreed to reduce the price of the pint to Dublin levels might appeal, although hopefully not those of a Temple Bar hostelry.

When is the second leg?

Wasn’t this a confrontation that once carried an over-18s rating?

It was ‘tasty’ at times, a sporting spectacle that encouraged the mixed marriage of pure bred Aussie Rules and Gaelic Football, resulting in a mongrel offspring, whose periodic charm was compromised by behavioural issues; they left a mess after a number of series that had to be cleaned up in every respect.

You’re not going to get all sniffy about a few punches here and there?

It was a little bit more than that at time but it was also part of the appeal, the free-for-alls, getting the balance right was the tricky part. Ireland’s manager Joe Kernan claims that his team will be physically capable of mixing it with the Aussies, a familiar refrain down through the years that doesn’t always pan out.

So the Aussies are going to pummel Ireland?

Maybe, but they have learned that by working on their skills with the round ball and their athleticism, they can win the matches by playing football. The sides will play two games in the series and if they each win one it will be decided by the aggregate totals of the match scores.

It’s over. Lewis Hamilton’s controlling dominance since the summer break meant that with the exception of Ferrari’s Sebastien Vettel – who retires at the end of the season – the rest of the grid had long since disappeared from Hamilton’s rear view mirror and he won his fourth title with three races to spare.

How did Hamilton’s rivals feel?

Fernando Alonso summed it up best: “This year was too easy, Mercedes four races to the end, constructors’ champion, Hamilton, three races before the end drivers’ champion.” It is Hamilton’s fourth title in what has become an engineers’ rather than drivers’ championship.

Is there Irish interest?

Ireland will have several representatives at the second World Cup race of the season, taking part in events like the Omnium, the Keirin and a race for 1960 American advertising executives, the Madison, among others.

To impress your mates it’s safe to volunteer the following: The Keirin is a sprint race, consisting of eight laps of the track. The riders follow a motorbike (called a Derney) that travels at a sedentary 25kmph before building up gradually to 50kmph and with about 600 metres to go the motorbike pulls off the track and the cyclists sprint to the finish.

So how the boys in green faring?

Ireland take on Wales in their final pool match, knowing that they have to win and also require the USA to beat Papua New Guinea for them to progress to the quarter-finals. The Irish side beat Italy in their first game (an upset) and produced a wonderfully gutsy performance against the Kumuls, PNG’s nickname that comes from the island’s national symbol and bird-of-paradise, in losing 14-6 before a 14,500 crowd in Port Moresby, the capital of the island. The polite term for their supporters would be passionate but it’s better to times that by a thousand. The Kumuls hammered Wales, Ireland ran PNG close; ergo the Irish side will win. Whatever happens, Mark Ashton’s squad has done Ireland proud.

Any chance of an Irish victory?

This column appears on a Friday and if I knew that I’d be down the bookies with a fistful of cash. What can be said is that Graeme McDowell won this tournament in 2015 and was tied 21st last year and Séamus Power finished tied 24th last year. Rickie Fowler is the bookmakers’ favourite.