Former Danish goalkeeper is fearful that Denmark could underestimate Ireland 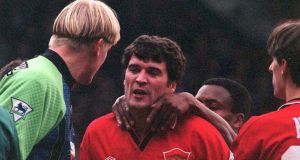 Peter Schmeichel says that he is surprised former Manchester United teammate Roy Keane is employed by the FAI. Pictured is Keane being restrained by Paul Parker and Gary Neville as he argues with Schmeichel in 1995. Photo: John Giles/PA Wire.

At this stage it’s become standard fare for Roy Keane to take some heat off the Irish squad in the lead up to big games by throwing a controversial line out to the media. Whether it’s deliberate or it’s just Keane being Keane can be hard to tell but his latest, about having “f**k all to say” to Peter Schmeichel if he bumped into him in Copenhagen before Saturday’s World Cup playoff, has the potential to run and run.

On Thursday Keane’s former Manchester United teammate had just a little dig back when asked if he was surprised that Keane was an assistant manager, given the leadership qualities he had shown as a player.

“I’m surprised he is employed by the FAI, I am. Maybe they kissed and made up. I don’t know,” Schmeichel said at a Carlsberg promotional event ahead of the first leg in Copenhagen.

The pair were, of course, two of the key players in Alex Ferguson’s 1999 treble winning team but not without their differences. As Keane outlined in his book, they ended up brawling at a Hong Kong hotel in 1998 and the relationship has been frosty since.

On Tuesday the Ireland assistant said: “I’d say f**k-all to him. What do you want me to say to him? Is he playing? He’s not playing. I’d say nothing to Peter. What could I say to him? I don’t keep in touch with Peter.”

While Schemichel clearly didn’t want to engage in any tit-for-tat with the Corkman, he did point to the experience of Keane and former European Cup winner Martin O’Neill as being crucial for Ireland when it comes to the big games.

“The better you can prepare your players and the more you can put their minds to it is really important,” Schmeichel said.

“The more talented managers have been in that situation, I go back to Sir Alex’s days, Sir Alex has played so many games, probably not as a player, but as a manager and he has faced so many crucial games. So his experience was just incredible. When we got to the big games, sometimes he’d give a team-talk that would only be two minutes; you thought ‘are you kidding?’

“He’d come in, give the team, ‘ok, don’t do blah blah blah, here’s the set pieces, have a good game’ and you were like ‘what?’ Then the next week you play the team that is rock bottom and the team talk is 40 minutes long. But that’s the experience, you know your players and you know how they react. Those two, the experience they’ve got, that would help them so much.”

When Schmeichel himself was lining out for Denmark they were one of the best teams in Europe and, in 1992, were officially the best when the won the European Championships. Since then the standard has gone downhill and the Scandinavians haven’t got past the group stages in either the Euros or the World Cup since 2004, reaching only one World Cup and one Euros in those 13 years. However, a positive vibe has returned to the land of Hamlet, jazz music and Carlsberg with the Parken Stadium in Copenhagen selling out for the first time in a long time when they beat Poland 4-0 in September.

There are a lot of Championship players that play in the Ireland team and they [the Danes] could go out there thinking ‘pfff, they only play in the second tier of English football’

While Schemichel believes Denmark will edge the game over two legs and begin a Danish football renaissance, he remains concerned that some of the Danish players could underestimate Ireland.

“I think they [Ireland] have incredible mental strength. When you have to go to Cardiff and you must win to stay in the game and you play the best Wales team at getting results that I can remember and you go and win, that’s impressive. This is my worry that some of the Danish players that don’t know England don’t know how good the Championship is.

“And there are a lot of Championship players that play in the Ireland team and they [the Danes] could go out there thinking ‘pfff, they only play in the second tier of English football’.

“But you’ve got Kasper [Schmeichel] in there, you’ve got Christian Eriksen, you’ve got [Jonas] Lossl and [Mathias] Jorgensen from Huddersfield, you’ve got AC [Andreas Christensen] from Chelsea. You’ve got a lot of players to remind everyone else that the Championship in England is the number five league in the world.”

Roger Federer survives seven match points to reach semi-finals 08:21
Andy Farrell set to name first Ireland team; FAI staff upbeat after first meeting with Quinn and Owens 07:27
‘It doesn’t bother me’ – Thomas Barr on the what ifs of Rio 07:00
Hopes of a home winner alive as Barty reaches last four 07:38
Waterford’s Bennett aware of past but looking to a better future 06:30

1 Ireland v Scotland: Doris’ day as Caelan set for first cap
2 Gerry Thornley: Temple Carrig are the true schools rugby story of the season
3 In mourning Kobe Bryant mourn the bad as well as the good
4 Owen Doyle: Breakdown of law and order in rugby must stop
5 Men in Black: The referees for Ireland’s Six Nations games
Real news has value SUBSCRIBE
Crossword Get access to over 6,000 interactive crosswords