Shane Duffy could be the decisive factor against Denmark

Containing Christian Eriksen is a priority for Ireland, and Duffy may keep the Danes at bay 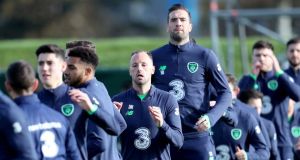 With Jeff Hendrick looking to be safely on course to start in Copenhagen, Martin O’Neill’s options seem to have broadened significantly going into Saturday’s World Cup play-off first leg. The 25-year-old may well slot into the side in a slightly more advanced role, but defending is likely to take up the bulk of his time; and, with other options limited, there is the potential for him to partner someone just in front of the back four, an area that Ireland will have to get right if Christian Eriksen is not exert a decisive influence on the game.

The clear message in the Irish squad’s various media events this week has been that Eriksen will not be man-marked, scarcely a surprise given the approach to other teams’ standout stars. But containing the Dane will clearly be a key priority, even if the manager sees it as a goal to be pursued as part of a wider team effort.

Harry Arter, who is likely to be involved on the defensive side of things in midfield, spoke on Wednesday about the need to close the Spurs star down. If Eriksen can be prevented from picking the Irish defence open with his passing while having the occasional crack at goal, then the home side may be happy enough to concentrate their efforts on hitting the ball high and long to their strikers.

In that scenario, Eriksen’s role changes somewhat, but he will most likely prove as dangerous. The 25-year-old is adept at getting on loose balls in or around the area and expert at making the most of the set-pieces that are routinely thrown up as a result of the approach.

O’Neill will be hoping that if that if things pan out that way, then Shane Duffy’s contribution might again be a decisive factor in Ireland’s favour. In Wales, with Gareth Bale out and the home side’s other creative midfield forces pretty effectively neutralised, Chris Coleman’s side resorted to punting the ball into the area in a way that suggested a little less fine-tuning on the training ground than the Danes have probably done.

Duffy, who has had some remarkable ups and downs over the course of his still fairly fledgling international career, came into his own in those closing stages, dominating the area completely as local levels of desperation grew.

“I think that if a bus was coming at Shane Duffy he’d try to get his head on it,” said Arter this week with a grin, as he reflected on the performance. Like Richard Dunne, Duffy might have his limitations but, with just 15 international caps under his belt and barely the same number of Premier League appearances to his credit, he is clearly progressing.

In the wake of that Wales game, indeed, there is suddenly a little of that sense that Dunne possessed on his very best days about the Derryman: a determination and resilience that is just impossible to suppress.

He deserves credit, and the fact he is playing most weeks in the Premiership would be a huge help to him

“I think it’s been great, I think he’s been great,” said Roy Keane of Duffy, whose first involvement with the senior squad, way back in 2010, ended in a training game mishap at Malahide that resulted in a severed artery to his liver and could ultimately have cost him his life.

“It’s strange, we were just talking about it there with the manager watching the training, about how well he has done over the last few years. I think I saw Shane three or four years ago when he was on loan at Yeovil, playing against Brighton. He’s done well, really well since then.

“He deserves credit, and the fact he is playing most weeks in the Premiership would be a huge help to him. He will improve but when you consider where he was three years ago . . .”

Much more recently, just before the move to Brighton at the start of last season, he looked to be struggling for form, with some difficult games for Blackburn. His confidence, though, seemed unaffected and Chris Hughton has helped to bring him on in immensely.

After having played a key part in the promotion-winning side, he is now settling remarkably well into life in the Premier League where he has already shown that, despite having recently described himself as “raw”, there is a good deal more to his game than a willingness to take a passing double-decker on the noggin.

“We’re talking about big lads who are six-foot-four, and so we expect them to be the ‘bullish’ kind of centre-halves,” observed Jermaine Jenas when talking about Duffy and his central defensive partner at Brighton, Lewis Dunk, on Match of the Day a few weeks back. “But they can also do these lovely little dinked passes to their wingers. It’s a big part of the way they play, thanks to the confidence Chris Hughton gives them,” he continued. “With all due respect, these are passes that six-foot-four centre-halves are not supposed to be playing. They’ve got a real nice touch and feel for the ball. And defensive qualities? Yes. But the quality on the ball is really impressive also. Honestly, they have a bit of everything.”

Duffy has yet to produce that side of his game quite so successfully for Ireland, but you suspect he will have plenty of opportunities. This Saturday, if he keeps Denmark at bay, then the chances are his manager will be happy with him at the end of the 90 minutes.