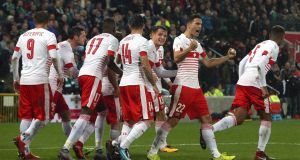 The road to Russia for Northern Ireland has been pot-holed by a potentially fatal blunder. “Dare to Dream” is their World Cup slogan but Michael O’Neill will have nightmares over the penalty that gifted Switzerland a crucial win and away goal in the first leg of the playoff .

Northern Ireland were under pressure throughout but had barely conceded a chance to Switzerland when the Romanian referee, Ovidiu Hategan, ludicrously punished Corry Evans for a deliberate handball that never was.

The Blackburn Rovers midfielder blocked Xherdan Shaqiri with the back of his shoulder as he turned away from a venomous volley but was adjudged to have handled inside his area. Ricardo Rodríguez’s confident penalty left Northern Ireland seething with anger but also facing a remote prospect of qualifying for a World Cup for the first time in 32 years. They will have to become the first team since England in 2014 to win a competitive game in Switzerland to erase Hategan from the memory bank.

The 16,000 green and silver flags that the Irish Football Association had commissioned started waving 15 minutes before kick-off and were still flying by the time the game began. Arguably the biggest game in Belfast since the win over Israel in November 1981 that sealed Northern Ireland’s passage to the World Cup finals had an atmosphere worthy of the occasion. But it proved a test of players’ patience as well as supporters’ belief.

O’Neill described the playoff as “matches which define your career”. His team began brightly, pressing the Swiss into several errors and inviting Fabian Schär to collect an early booking when he scythed down Stuart Dallas as he broke down the left wing. Increasingly and ominously, however, Switzerland dominated possession, enjoying a 69 per cent share in the first half, and it needed all of the experience of Jonny Evans and Gareth McAuley in central defence to keep the visitors at bay. It was a relief that Michael McGovern had faced one effort on target by the interval.

Northern Ireland did not help their cause by gifting possession back to the visitors with a series of aimless clearances. A dangerous ploy with Shaqiri and Stephan Lichtsteiner in the opposition ranks and one that hindered attempts to build support for Kyle Lafferty. The centre forward was an isolated and frustrated figure in a first half that featured no attempts on goal by the home side.

Switzerland’s first opportunity arrived when Rodríguez’s cross was headed down into the path of Blerim Dzemaili. The unmarked forward looked set to score from 10 yards out but Evans intervened with a vital block. Granit Xhaka placed the rebound inches over the crossbar from the edge of the area and the Arsenal midfielder cursed his luck again moments later when another long-range shot just missed McGovern’s goal.

Northern Ireland survived another sustained spell of pressure instigated by Schär’s superb ball over their defence from the halfway line. Steven Zuber’s touch to Haris Seferovic was just too heavy for the Benfica striker to connect but he was there to volley Shaqiri’s inviting cross goal-wards when the Stoke City playmaker kept the attack flowing. McGovern saved low to his left and despite the one-way flow of traffic that was his only moment of trouble before the break.

Shaqiri was a fraction away from finding the top corner within seconds of the restart as the pattern of the playoff remained unchanged. His trademark left-foot curler sailed just over and there was another reprieve when Dzemaili sent a low ball across the face of the goal and Seferovic was inches from converting at full stretch.

Then came the moment that shattered Northern Ireland’s prospects of taking a clean sheet to Basel on Sunday and will long linger in the country’s list of football grievances. Rightly so. Shaqiri was again left unmarked as a cross-field ball dropped into his path 20 yards from goal. He took the shot confidently first time but his volley struck Corey Evans and cannoned to safety. To general astonishment, however, the referee pointed to the penalty spot.

Shaqiri’s shot struck the younger Evans brother on the shoulder as he turned away from close range. No intent, no deliberate handball and no prospect of getting out of the way had he so desired, yet Hategan deemed it a penalty offence. He added insult to injury by booking Corey Evans, thereby ruling him out of the return through suspension.

Rodríguez ignored the justifiable anger around Windsor Park to send McGovern the wrong way from the spot and the sizeable task already confronting the home side increased. One small pocket of Switzerland supporters tucked away in a corner of the stadium revelled in their great fortune.

Fuelled by a sense of injustice Northern Ireland responded with their most encouraging spell. But chances remained at a premium and it was a costly miss by Josh Magennis as he headed wide when found unmarked by Chris Brunt’s inswinging free-kick. – Guardian service

1 Gerry Thornley: Saracens very late to apologise for repeated cheating
2 Conor McGregor hails Donald Trump as ‘USA goat’
3 As the UK tightens gambling laws Ireland still lags way behind
4 Felix Jones expects De Allende and Snyman to boost Munster
5 Champions Cup final: How to get there, how to get tickets and more
Real news has value SUBSCRIBE
Crossword Get access to over 6,000 interactive crosswords