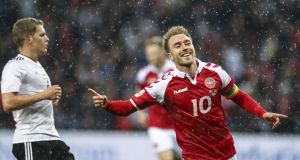 Christian Eriksen celebrates after scoring in a friendly against Germany in Brondby, Denmark, on June 6th, 2017. Photograph: Getty Images

In February 2011, the advance billing for England’s friendly against Denmark in Copenhagen revolved around the full international debut of 19-year-old Jack Wilshere. Fabio Capello, the England manager, placed the Arsenal youngster in a starry context by reminiscing on the youth of exceptional Italian players he had managed in the past like Paulo Maldini and Franco Baresi. “It’s about talent,” he explained.

England won the fixture 2-1, but it was Denmark’s prodigy Christian Eriksen who owned the night with a scintillating play-making performance that was at once commanding and ethereal. He was hardly an unknown then: the youngest player to feature in the World Cup in South Africa the previous year and Denmark’s youngest international cap since Michael Laudrup.

Watching the intricacies of Capello’s defensive framework dissolve quickly intensified the interest of the English clubs which had been monitoring his progress at Ajax.

Liverpool were linked as prospective bidders, and it would later emerge that Eriksen turned down a move to Manchester City. Tim Sherwood, an assistant at Tottenham Hotspur at the time, was among those watching on television.

“I rang Daniel Levy [club chairman] the next day and said that he needs to sign this boy,” Sherwood would recall with satisfaction some three years later after watching, as manager, Eriksen dismantle Fulham in a 3-1 win.

Six years have passed since that evening in the Parken stadium where Ireland will on Saturday evening face Denmark and more specifically Eriksen in the climactic stages of what has been an arduous World Cup campaign. It is the perfect contrast: if Ireland is a team conspicuously devoid of virtuoso talent, then Denmark have catapulted towards this play-off largely on the strength of Eriksen’s extravagant array of creative gifts.

For Martin O’Neill, the recent evidence of the critical influence Eriksen exerts on the national team must have been ominous. In early September he was central in creating goals for Thomas Delaney, Andreas Cornelius and Nicolai Jørgenson, before completing a 4-0 thumping of group winners Poland with a goal from a free kick.

A month later he scored the only goal in Denmark’s away win over Montenegro in Podgorica, a result that reversed the setback the Danes suffered in Copenhagen a year earlier.

Three nights after that and back home he converted a penalty in a 1-1 draw with Romania to extend his scoring streak, and usher Denmark through to the playoffs in a confident run of form.

Initial Irish jubilation at having drawn the Danes ignored that the team has gone unbeaten in their qualifying group since October 2016, and that their only two losses in the group were confined to a bleak three-day period over a year ago.

When Eriksen was asked about his master-class against Poland, he simply said: “You must judge. Measured on assist and goals it was probably one of my best international matches.”

The reply contains everything that Eriksen’s coaches have praised about him: an unshakeable self-belief cloaked in modesty, a comically Nordic even-temperedness and a level-headed appraisal of his own worth.

“Eyes in the back of his head,” said Frank de Boer, his coach when he joined the Ajax underage structure.

“I had to drag him off the training field every day,” claimed Sherwood.

“I like him a lot because he does not need to be recognised,” said Mauricio Pochettino, his manager at Spurs, this year.

Eriksen’s progression to this point has been disconcertingly straightforward. He is, by all accounts, a thoroughly likeable young Danish man who was obsessed by football during his childhood in the pleasant town of Middelfart. He played a lot of Football Manager in his leisure time, got his first technical grounding from his father, joined Odense at 13, where he proceeded to destroy rival teams and enjoy huge local acclaim without losing sight of the bigger picture.

There were trials with Chelsea and visits to other of Europe’s super-clubs before he settled for the smaller-scale advantages of Ajax at the age 16.

Football, rather than profile or instant mega-wealth, informed his instinct. He thrived at Ajax: initially he was moved from under-19 to under-17 to facilitate his settling in but the response was the same: he took a couple of games to adjust before quickly becoming the outstanding player on his side. Eriksen was still just 17 when De Boer told the first team management that he was ready to make his senior debut against NEC Breda in January 2010.

The synopsis of Eriksen’s emergence is of a singular talent brilliantly guided. Ajax were patient in how they challenged him, but each time his response was emphatic. The 2011 season confirmed him as one of the club’s jewels: he finished as Danish footballer of the year, Ajax’s player of the year and, most significantly, the Dutch Talent of the Year.

He joined Tottenham just a week before the summer transfer window closed in August 2013, landing at the London club during the spree which followed Gareth Bale’s bonanza move to Real Madrid.

Eriksen took his habit of instantly settling into a side with him to London, applying his heightened reading of the game and terrific passing ability to pull the strings in a 2-0 win over Norwich just three days after meeting the other players. He wore number 23 but played as an archetypal number 10, drawing a chorus of compliments.

Sebastien Bassong, a former Spurs defender who lined out with Norwich that day, offered a deft scouting report which has a clairvoyant ring to it.

“[Mesut] Ozil must be one of the best number 10 in the world, a fantastic player, and Eriksen is not far behind him. He knows where to put himself, floating between the lines. As soon as he gets the ball he is a threat.

“He plays very simply. With his touch and vision he sees the right pass at the right moment. It’s hard to know whether to follow him because he can make the difference as soon as he gets the ball, in a split second. That is how top quality players are, and he is a top quality player.”

Bale was injured as Real Madrid were run ragged by Tottenham on that recent famous evening at Wembley when it felt as if the power base in the European game might be shifting. Eriksen’s 66th minute goal marked the high point of a dreamy hour when Spurs had fun against Madrid, running in three goals before Ronaldo snatched a late consolation.

The match was a further high point in what has been a dazzling autumn for Eriksen. It wasn’t just the goal – a cool finish after holding off Spurs’ former creative sprite Luka Modric. It was his propensity for popping up everywhere – letting the ball run through for and then busting a gut to offer support on the right for Delle Ali’s second goal; drifting into the penalty area time and time again unnoticed and always creating, seeking to set up Fernando Llorente for a fourth in the 90th minute.

Last summer he signed a contract that keeps him at Tottenham until 2020. But his departure from his usual mode of quiet excellence to being talk of the town will see him shoot up the most-wanted charts. For if there is a complaint to be made against Eriksen, it’s that he has sometimes disguised his distinct ability too well.

It is just over three years since Denmark lost to Portugal in a match which left then manager Martin Olsen infuriated by what he saw as Eriksen’s passivity.

“After so many matches he could pick up the ball and help control the game. He has not been able to. Therefore we blame him. He must stand up to the criticism – and he does.”

He continues to. Eriksen wears the responsibility of acting as Denmark’s talisman with impossible lightness. With six goals in Denmark’s last eight goals and happy in a Spurs team that mixes true craft with the cavalier, he is entering the prime phase of his football life.

He is a problem for Ireland. It could be that the best hope is that the uncompromising and combative approach of O’Neill’s team might convince Eriksen that this is not the type of encounter best suited to his talents. In Cardiff, Wales were never quite the same after Joe Allen, their slender playmaker, left the pitch with a heavy knock.

But Eriksen has a gift for eluding the stampede rather than trying to fight his way through it. “I’ve always been a player on the move,” he told Jonathan Liew in an interview with the Telegraph last Christmas. “It’s not because I like running. I like getting the ball. If you are smart enough you don’t need the ball.”

He will take minding.

1 Gordon D'Arcy: I know what Joe and Cheika would do. Fix the basics
2 Darragh Ó Sé: Cork and Donegal went out with the wrong attitude
3 Can Solskjaer’s Man United find their groove when it matters?
4 Lancaster says Ireland need to finish series on a high
5 Simon Easterby admits Ireland may need to take new line on maul
Real news has value SUBSCRIBE
Crossword Get access to over 6,000 interactive crosswords