Brady ready for All Whites; Natural changing of the guard imminent in Irish rugby 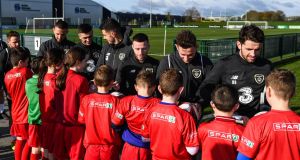 A group of schoolchildren meet the Irish senior football team at their Abbotstown base ahead of Thursday night’s friendly match against New Zealand and next week’s Euro 2020 qualifier versus Denmark. Photograph: Sportsfile

Robbie Brady believes Ireland’s game against New Zealand tomorrow night might be the start of something big for young Tottenham striker Troy Parrott. Brady is rather hoping to contribute himself and has his own eye on Monday’s qualifier game against Denmark with the New Zealand outing primarily a vehicle to get game time and reassure the manager that he is back to his best. The New Zealand team are known as the All Whites. Often overlooked in a nation obsessed by rugby union is that fact that New Zealand has a proud footballing history, and have twice qualified for the World Cup. The Irish women’s team conceded a late equaliser in their Euro qualifier against Greece yesterday - “this means we’ll have to go through on a playoff,” admitted their manager Vera Pauw afterwards. Amber Barrett’s beautiful 13th-minute opener was cancelled by a last-gasp volley from Anastasia Spiridonidou, read the match report here.

In his column this morning, Gordon D’Arcy explains how a natural changing of the guard is imminent in Irish rugby: “No transitional period is ever easy. It takes courage. I remember how it felt in 2015. You rage against the dying of the light just as your body rages against you. It is a fight on two fronts, with the man who is taking your jersey and with constant niggles slowing ageing limbs.” Peter O’Mahony, refreshed after two weeks back in Cork with his family is popping to be back among his Munster players and eyeing a first European match of the season this weekend.

1 Trump directs team to co-operate on transition as Biden builds new administration
2 Exiting Level 5: Ministers to push for reopening of shops, restaurants and churches next week
3 How to gift your child a house deposit . . . tax free
4 Alison Curtis: My guilt at not going for a second pregnancy
5 BOI customers to be charged twice with bank fees on New Year’s Eve
6 Mentally ill prisoner found naked on floor of solitary confinement cell
7 Gerry Thornley: Ireland don’t want to box themselves into a corner
8 ‘Shock and dismay’ as barristers asked to repay Government Covid grants
9 Orangeman was asked if he wanted Irish flag removed from Dublin Castle
10 Irish designer of Oxford vaccine: ‘I’ve never worked so hard in my life’
11 Operator rejects claims by Dr Tony Holohan that car parks are full
12 Fintan O’Toole: Our Government should be a fox. It is actually a snake
13 We continue to ignore massive pensions elephant in the room
14 ‘Shatter the glass ceiling’: First woman university chief in Ireland after 428 years
15 Owen Doyle: Ireland suffered from officiating of the breakdown
16 Somebody needs to explain sovereignty to Johnson before it is too late
17 Patrick Freyne on Christmas ads: That goat in a beret looks uncannily like Emily in Paris
18 Son putting elderly dad under pressure to sign over land
19 Kevin McStay: Maybe a knockout All-Ireland Championship is the long-term solution?
20 Holohan calls for end to victim-blaming on breaches of public health guidelines
21 The beginning of the end: 10 things to know about Covid-19 vaccines
22 Covid-19: Level 5 restrictions likely to be eased in two stages, as planning to roll-out vaccine begins
23 Workers have little idea of the cost of retirement income
24 Ten of the best Christmas songs (that aren’t by Mariah Carey)
25 The economic realities of a united Ireland
26 Demand that barristers repay Covid grants may be unlawful
27 No-deal Brexit worse for UK economy than pandemic, says regulator
28 Trump directs team to co-operate on Biden transition – but insists fight continues
29 Co-living in the Liberties: Rapidly changing urban fabric proves divisive
30 Dublin’s monopoly an increasingly difficult problem for Leinster Council
31 Face masks don’t impede exercise ... except for one type
32 Germans push back against anti-mask Nazi resistance comparisons
33 Minister for Housing to ban new co-living developments
34 Vaccines doses, underfunded pensions, and gifting your child a house deposit
35 Aryzta’s €1.2bn of loans prevent hostile Elliott bid
36 The ice-cream maker who was diagnosed with diabetes
37 Over-65s most hit by Covid-19 fatalities, study shows
38 College in a time of Covid: Are third-level students being short-changed?
39 The Offload: Ireland are stuck in no man’s land
40 Holly White’s lentil Bolognese: ‘I can’t believe this is vegan’
Real news has value SUBSCRIBE