Peter O’Mahony back to lead Munster against Ulster 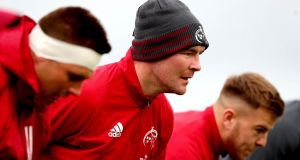 Both Munster and Ulster welcome back a host of Ireland internationals for Saturday’s interprovincial clash at Thomond Park.

Munster boss Johann van Grann can call on eight of the province’s Rugby World Cup contingent, with Peter O’Mahony back to lead the side in Limerick.

In total Van Graan has made 12 changes from the side which won away to Cardiff last week - Joey Carbery’s ankle injury allows JJ Hanrahan to continue at outhalf, while Alby Mathewson and Chris Cloete also retain their places.

Meanwhile for the visitors Jacob Stockdale - who had a quiet World Cup by his own high standards - returns on the wing, with Jordi Murphy also reinstated in the backrow.

Stockdale’s return means Matt Faddes switches to fullback, with Rob Lyttle completing the back three. Stuart McCloskey and Luke Marshall start in midfield, with Angus Curtis at 10 and John Cooney at nine.

Up front Jack McGrath and Marty Moore start either side of Rob Herring in a powerful frontrow, with Sam Carter and Alan O’Connor in the engine room. Sean Reidy and Nick Timoney join Murphy in the backrow.

Trump prefers Jordan to James because ‘he wasn’t political’ 16:45
Mark Selby books semi-final spot after crisis of confidence 13:09
Galgorm Castle resort could rescue 2020 Irish Open 11:25
Iain Henderson out for up to 10 weeks after hip surgery 10:26
Leeds sign teenager Charlie Allen from Linfield 10:08
Here is your handy guide to sport on television this week