Seán Moran: Mayo will have some explaining to do when Croke Park come calling 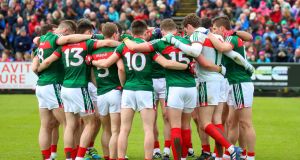 Mayo team in a huddle earlier this year. The fall-out from this controversy has seen what originally looked like manna for the financially beleaguered county board turn into something more akin to acid rain. Photograph: James Crombie/Inpho

Mayo’s current long dark night of the soul, soon to be illuminated by Croke Park searchlights, has its origins in an astonishing failure to adhere to central protocols.

In the blizzard of documentation flurrying through cyberspace, arguably the key communiqué is an email, dated April 9th, in which the Mayo GAA International Supporters Foundation (MGISF) lays out its understanding about the funds to be raised at the gala event in New York last May.

The MGISF and its prime mover Tim O’Leary, an international financier who is English-born and second-generation Mayo, used this email firmly to counter demands that the money raised in May should be handed over to the Mayo County Board without delay. Instead €250,000 raised by the event continues to be held by the foundation, pending clarification of governance issues.

On the face of it, O’Leary’s concerns don’t appear unreasonable and he made it clear in the April email that he would distribute the vast preponderance of the money raised (after small donations to charity and local New York GAA) to projects for a training facility in Mayo, a youth academy and also towards player welfare and development.

This was sent to county chair Mike Connelly on the above date but alarm bells should immediately have rung because there are strict rules about the relationships between GAA units and outside fund-raising groups. Such bodies should have a representative of the county’s GAA on their board and whoever it is, is supposed to be a signatory on the account.

Yet, in his email of November 4th to clubs and executive officers, O’Leary denied that anyone from the county board had – as asserted in a statement of 30th October – “made it ‘abundantly’ clear to him that money raised in the name of Mayo GAA shall remain in the control of Mayo GAA”.

He further pointed out that had this been the case, he would not have proceeded with the fund raiser. In other words, he wasn’t willing to engage with Mayo on the terms laid down by the GAA.

This is in retrospect extraordinary. As soon as O’Leary’s views emerged in April, Mayo and Connelly should have walked away.

Outgoing treasurer Kevin O’Toole is particularly well regarded inside and outside Mayo for the efforts he made to streamline the county’s official fund-raising arm CairdeMhaigheo, which is a body compliant with GAA protocols.  It is hard to imagine that he was best pleased to see such an irregular arrangement emerge with MGISF.

To recap, for those whose will to live has outweighed any desire to be fully acquainted with the imbroglio, the controversy centres on the MGISF’s unhappiness with how the funds it has both raised and already distributed have been – and are to be –allocated.

The longer this situation continued, the more bitter the stand-off has become. County chair Mike Connelly, who at May’s New York event described O’Leary as “one of the greatest Mayo supporters”, has found himself caught between the MGISF – which at one stage looked like becoming a vital resource for the county – and the unhappiness in the clubs at the way such a vital piece of county board business has been mishandled.

So the fall-out from this has seen what originally looked like manna for the financially beleaguered county board, still servicing a Croke Park loan to cover improvements made to MacHale Park – clubs pay an annual levy of up to €7,000 – turn into something more akin to acid rain.

Mayo GAA responded in time-honoured fashion by circling the wagons and huddling round the bonfire.

Media was excluded from the recent board meeting and there were successful calls for this to become a normal modus operandi within the county. In the information gap that ensued, feeble attempts to feed the ‘nothing to see here’ narrative were made with specious claims of a broad consensus in support of the executive – which were immediately disputed by some of those present.

It should be pointed out at this juncture that GAA head office can hardly have any credible concerns on this matter, having long ago declared its own Central Council meetings off limits to reporters.

There may be occasional need for caution in publicising association business but blanket bans and codes of silence do not sit well with many of the organisation’s self-projections of openness and accountability – nor in the case of a county board, the simple maintenance of relations with its local community.

In Mayo, undertakings to deal with the concerns and allegations of the MGISF have not come to pass apart from a statement read at the second-last board meeting on 30th October after which no questions were allowed.

Then at the quickly-convened follow-up meeting, on 4th November, the same issues were effectively declared sub judice because of legal letters from O’Leary and again, weren’t discussed.

Interestingly, when this was all beginning to emerge at the end of September after an MGISF email to the Mayo GAA, Castlebar Mitchels’ delegate Michael Diskin raised obvious questions with the top table at the county board meeting on 25th September.

If there was an organisation out there raising funds for Mayo GAA, shouldn’t the county board have been represented on it? Was there a written agreement or protocol to govern the relationship with MGISF? Had MGISF a written constitution and if so, the county board seen it?

The points weren’t replied to beyond a vague undertaking that everything would be dealt with at the following meeting, which of course hasn’t happened.

Tim O’Leary hasn’t done anything wrong in relation to the fund raising activities of MGISF, which has raised close to half a million for Mayo GAA. In fact he spelled out his view of matters in the email of April 9th. He appears though to have been allowed to believe that he could have unfettered control over the distribution of the funds.

If O’Leary remains unwilling to sign up to the relevant protocols, Mayo GAA have little option but to cut ties with the MGISF and leave it to them how they distribute the remaining money.

Another email, this time from the Connacht Council CEO John Prenty, last week in bleakly formal prose, “instructed” Mayo officers to attend a meeting with provincial and Croke Park officials, including GAA director general Tom Ryan, in the coming weeks.

There’ll be a bit of explaining to do.