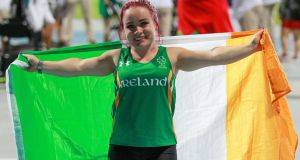 Niamh McCarthy has won Team Ireland its first medal at the 2019 World Para-Athletics Championships in Dubai.

The Cork athlete, and European champion from last year, threw a fourth round best of 29.70 metres to win the bronze medal in the F41 discus, having sat just outside the medals in the earlier rounds.

A relieved McCarthy said: “That was probably one of the hardest competitions I’ve ever done, being part of it, it’s not something I ever want to do again but it went my way in the end so I can only be happy that I’m coming away with a medal, I don’t really care how it happened.”

Winning gold with a championship best of 34.48m was Raona Tlili from Tunisia, with Youssra Karin winning silver for Morocco with her best of 33.59.

McCarthy was one of the 10 Irish athletes to win nine medals, six of them gold, at the 2018 European Para-Athletics Championships in Berlin.

Among those adding another sprint double gold there was Jason Smyth, who look to continue his winning streak when he lines up for his 100m event in Dubai on Wednesday.