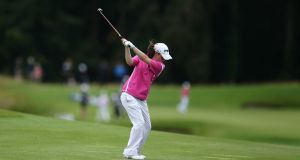 Lisa Maguire’s new career will take her away from hitting golf balls, and onto a new direction working with Modest Golf! - the sports agency established by singer Niall Horan and which signed the player - along with twin sister Leona - when she turned professional 18 months ago.

While Leona has enjoyed great success in the paid ranks, graduating from the Symetra Tour to earn a full LPGA Tour card for the 2020 season, Lisa struggled to nail down a tour card and the 24-year-old has decided to bring an end to her professional career while remaining in the golf industry.

In a tweet, Lisa - who had an honour-laden amateur career which included Curtis Cup representative honours - explained: “Over the last 15 years, golf has afforded me so many wonderful opportunities to travel the world, meet new people and experience new cultures in a way I would have never thought imaginable. Golf has been and still remains one of my true passions in life.”

Maguire - a graduate of Duke University - will work the sports management agency and aims to bring her expertise into growing the women’s game in Ireland. “Obviously we’ve two members on the LPGA Tour now in Leona and Stephanie Meadow but in five years it would be nice to see five girls on the LPGA, in 10 years, 10 girls on the LPGA. Anything I can do over the next number of years to turn that dream into a reality, I’m all for it,” said Lisa, speaking to irishgolfer.ie.

While giving up the longheld ambition of being a tour player, Maguire added: “It’s not exactly on the golf course per se but it is nice to be outside the ropes and still be so involved in the golf industry. It’s an opportunity to give something back to a game that has been so good to me over the years and I’m really excited to see what the future holds.”