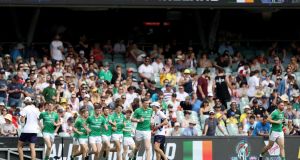 Ireland run out at the Adelaide Oval. It is two years now since the last series was staged in Australia in November 2017. Photograph: Tommy Dickson/Inpho

The GAA remain hopeful of resuming the International Rules series with Australia in 2020. The main apathy in agreeing a date, it seems, is coming from Down Under.

It is two years now since the last series was staged in Australia in November 2017; the Australian Football League (AFL) hosted and won the two-game series, played in Adelaide and Perth, on an aggregate score of 116-103, winning back the Cormac McAnallen Cup in the process.

Before that, the series had been slimmed down to a one-off Test, with Ireland winning at home in 2015, and Australia winning at home in 2014. With the GAA due to host the next series, a date (or dates) in 2020 is being considered as part of the GAA’s master fixture list, which will be presented to Central Council for approval on Saturday week, November 23rd.

“Negotiations with the AFL are ongoing,” said Alan Milton, the GAA’s director of communications. “Nothing has been confirmed, as of yet, but there is scope and room for the fixture at the end of next year’s fixture list. It just depends on what it will take to get it over the line.”

The so-called compromise game underwent some considerable compromise of its own in order to keep interest and enthusiasm alive in recent years. Since the original series in 1984, it consisted of a two-Test format since 1998, only to be suspended for a year after the violence which married the second Test in 2006, played before a sell-out crowd of 82,127 in Croke Park, which remains the record attendance.

The last face-to-face discussions between the AFL and GAA president John Horan took place in Australia this time last year, as part of the Wild Geese Trophy, a hurling match played in Sydney last November between Kilkenny (as league champions) and Galway (as the previous year’s All-Ireland champions) – before that game was also shelved until further notice.

It had been suggested that one of the games would be played on the east coast of the US in 2019, part of the issue with that being the cost (usually covered by the host country) and finding a sufficiently-sized playing surface. Unable to agree on a date for 2019, the GAA and AFL instead agreed in principle to enter discussions for a five-year plan to resume the series again, starting in 2020.

Part of the issue for both the GAA and the AFL was the impact the series was having on the players’ closed-season (part of the reason, it seems, why the GAA also shelved the Wild Goose Trophy). A decent series in 2008 got things rolling again, only there was a sense after the 2017 series Down Under that it had lost much of its magic, in part because of the desire for good behaviour within both camps.

Meanwhile as part of their approval of the GAA’s master fixture list, Central Council will also have to sign off on an increasingly busy spring across both codes.

It was already agreed that beginning in January 2020, the AIB All-Ireland club senior championship finals will be moving from their traditional St Patrick’s Day; the senior semi-finals in hurling and football will be played across the weekend January 4th/5th, the senior finals in both codes will now be played on Sunday, January 19th.

All-Ireland champions Dublin will begin their campaign under lights at Croke Park on Saturday, January 26th in a rematch of their final opponents Kerry

The Fitzgibbon Cup is also scheduled to finish on February 12th.

All counties in the Allianz Football and Hurling League have been given advance notice of their 2020 fixtures, allowing for some room for change pending final approval by Central Council.

What is already certain is that All-Ireland champions Dublin will begin their campaign under lights at Croke Park on Saturday, January 26th in a rematch of their final opponents Kerry.

Dublin will be away for four games in 2020 (against Mayo, Galway, Tyrone and Donegal), while hosting Monaghan and Meath, plus Kerry, at Croke Park.

The Allianz Football League finals are set to take place on March 28th/29th.