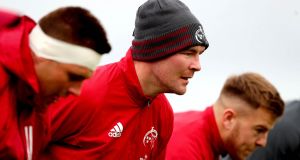 At some point after Ireland had imploded and prepared to leave Japan, Johnny Sexton said that disappointing performances in a World Cup can follow a player around for the rest of his life.

It was a typically candid Sexton sounding like a player prepared to face it and deal with it. It is also part of the World Cup fallout with which Peter O’Mahony is prepared to agree.

The Munster flanker, refreshed after two weeks back in Cork with his family and equally popping to be back among his Munster players and eyeing a first European match of the season, is too much of a veteran to see no sense in the words of the Irish outhalf.

“ Yeah I’m feeling good,” he adds. “The last time I came home from a World Cup I was out for 12 months, so it’s certainly better than that.”

It is not hard to be better than suffering a serious cruciate ligament injury in the final pool game against France back in 2015. Before Ireland played in their doomed World Cup quarter-final with Argentina, the iconic Munster man was back at home in Cork, his World Cup dream shattered.

“Look I feel good, my body feels good. Two weeks off back home to the family, back home to Cork for two weeks. Spend a bit of time at home.

“As I said I was hugely ready to come back in last week. I hadn’t seen some of the boys for a long time. This place is home to me and I love coming home.”

They are the sort of words that give O’Mahony such hard currency in Munster. With them and the cleansing effect of the familiar gym and pitches, the rugby banter, and the sounds around Limerick University, World Cup failure and picking up from the aftermath seems that little bit easier.

He has busied himself with the new coaching regime, the new thinking, the new emphasis of former Australian outhalf Stephen Larkham and English loosehead prop Graham Rowntree.

The engagement with the newness of it appears to have consumed O’Mahony and for now it is a useful diversion to what happened in Japan.

Then again, he understands his moorings in Munster better than almost any player and finds a welcome familiarity with it all – even with the transition and the changes he and the returning World Cup players face before Ospreys on Saturday.

“I’d like to think I have come back in as the same person I left as,” he says.

“Another experience under my belt. But I haven’t changed the way that I have sat in my seat and commented at meetings, or, the way I have trained. I have trained as hard as I could.

“There was a lot of change for us across the board – set-piece, attack, defence. There was lots of stuff we changed, which was good, which turned out well last week under pressure from Ulster.

“It’s going to be a massive challenge again for us this week. We have a lot of new stuff in again that we have to go back on and run with it this weekend.”

O’Mahony knows the old school blueprints Rowntree uses, having worked with the former Leicester player during a recent Lions tour. The arc of his career has been to slot into various squads and quickly adapt to different methods. It’s a small cost easily overcome.

While Ospreys have not been impressive at the start of the season, the rule of thumb not to be sucker-punched in the first round of Europe is to assume they will be different in every way.

The Welsh side have won just one match from six and are one place from the bottom of Conference A, four points ahead of last-placed Zebre. They have not been impressive.

But instincts are everything in Europe and, for Munster and O’Mahony, a struggling side sends out all kinds of danger pheromones. He defaults back to a war footing of wary respect and caution travelling to Liberty Stadium.

“As soon as you let the ball drop in one of these games you are under huge pressure, huge pressure. I think it is not going to be any different this week. No matter who the other team picks it’s going to be a hugely physical encounter. Look we will have a big physical confrontation to deal with.”

It is where he is comfortable. Closing one chapter and opening another where he understands the narrative that bit better. Munster in the Champions Cup cannot be any more than normal. But that mind shift, it is easier said than done.

“Probably is,” he agrees. “I think the mentally stronger players will probably use it better and deal with it better. That [Irish] group is a mentally strong group. I think it will be better for everyone that we use the experiences to get better performances and learn from that. Put in big performances for our clubs, that’s the main thing.”

Now the only thing.