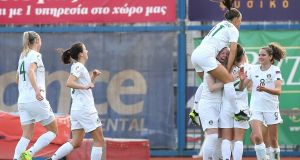 Ireland striker Amber Barrett is mobbed by her team-mates after she scored in the Uefa Women’s European Championship qualifier against Greece in Panionios, Athens. Photograph: Greg Hellas/Inpho

While the senior men’s team are relying on a strong finish to reach a major tournament, the women’s strong start to the European Championship came unstuck in Greece on Tuesday afternoon.

The concession of a late equaliser on a mild afternoon in Athens, following consecutive victories over Montenegro and Ukraine, represents a set-back in the hunt to end a qualification drought for the 2021 finals in England.

Amber Barrett’s 13th-minute opener was cancelled by a last-gasp volley from Anastasia Spiridonidou, only on the pitch seven minutes as a substitute.

“This means we’ll have to go through on a playoff,” admitted Ireland manager Vera Pauw.

“It was disappointing to concede the equaliser so late in the game but I don’t think we were good enough.”

Her frustration at dropping points on the road relates to the qualification format, as only three of the second placed teams across the nine groups join the pool winners at the showpiece.

If Ireland hold onto the runners-up spot, a playoff will have to be negotiated to secure a first-ever major tournament qualification.

Next up for Ireland is a double-header in March at home to Greece and away to Montenegro. Following Tuesday’s slip-up against a nation seeded below them, six points are essential to keep hold of second spot.

That’s a must given Ireland still have to make the trip to Ukraine next June.

Pauw pointed to the absence of key players for their struggles in the latter stages, Ireland having travelled without three stars from last month’s 3-2 home victory over Ukraine.

Compounding the losses of Heather Payne, Megan Campbell and Megan Connolly were injury doubts over Keeva Keenan and Rianna Jarrett.

Both were named on the bench but Jarrett’s recurrent knee problems prevented her from coming on in the second half.

Pauw said: “We were missing a lot of quality players and that cost us. I predicted a few weeks ago that we would lose players through injury.

“The first two weeks of November is when players in the women’s professional game sustain injuries.

“We have no control over how many matches the players get at their clubs. Too many games leads to fatigue and then injury.’

Ireland got off to a flyer when Barrett – one of five newcomers in the starting team – lobbed Greece’s goalkeeper Anthi Papakonstantinou with a volley.

Leanne Kiernan – along with the two centre backs Louise Quinn and Dianne Caldwell – wasted opportunities to extend the lead, while Niamh Fahey smashed a shot over the crossbar in first-half injury time.

During the entire first half, Marie Hourihan in the Irish goal was only worked once.

When Christina Kokoviadou got between the Irish centre backs two minutes before the interval, her low shot had to be parried away by the stopper.

A last-ditch block by Julieann Russell from Athanasia Moraitou’s close-range shot was also required to keep the Greeks at bay.

Australia-based Russell, on a harsh yellow card, was replaced by Keenan at the break, while Barrett switched roles with Kiernan to allow the latter operate as the sole striker.

Denise O’Sullivan should have killed the qualifier off with a second five minutes after the restart.

Excellent play from 17-year-old Emily Whelan created the chance from the left and O’Sullivan skipped past another two defenders.

She had a sight on goal but fired her effort too tamely to test Papakonstantinou.

Fourth-seeds Greece grew in confidence as Ireland retreated deeper and Elina Moraitou floated an 80th-minute shot over the crossbar.

And into injury time Caldwell needed to deflect Veatriki Sarri’s shot out for a corner.

Once they isolated Katie McCabe operating as a makeshift left back, Spiridonidou was allowed ghost in undetected at the back post. The winger beat Marie Hourihan with a side-footed volley inside the near post.