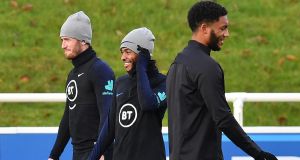 England’s Ben Chilwell , Raheem Sterling and Joe Gomez during a training session at St George’s Park in Burton-on-Trent on Tuesday ahead of their Euro 2020 qualifier against Montenegro. Photograph: Paul Ellis/AFP via Getty Images

Gareth Southgate faces the sternest test of his England tenure after his decision to drop Raheem Sterling for Thursday’s Euro 2020 qualifier against Montenegro at Wembley left the forward and others in the squad believing the manager has overreacted.

Sterling has been punished following an altercation with Joe Gomez in the canteen at St George’s Park on Monday that left the latter with a cut under his right eye. The Manchester City forward is thought to have still been upset about a coming together with the Liverpool defender during Sunday’s 3-1 defeat at Anfield.

Yet despite leaving Gomez with a physical scar, Sterling’s view is that he has been harshly treated by Southgate and the latter will hope he has not alienated a key player. England need a point to qualify, with Sterling the star performer during the campaign with eight goals and five assists.

Danny Rose said he did not consider the bust-up to have been a “big deal”, although the Tottenham left back stopped short of criticising Southgate’s decision to exclude Sterling against Montenegro.

“The manager has stated he is not happy with what has happened but for me it is something I have seen many times being a professional and you just literally shake hands and we all move forward,” Rose said. “It’s not right but it happens and it can happen. Raheem is fine – or as good as he can be.”

While Southgate did accede to the view voiced by players that the 24-year-old should remain available for Sunday’s trip to Kosovo, he did not accept an intervention from Jordan Henderson, Liverpool’s captain, suggesting Sterling should be allowed to play against Montenegro.

Southgate admitted on Tuesday he may not have made the correct decision and pointed to how important Sterling is to him. He was asked if players agree with the decision or whether it may be harsh. “I always have to find the right solution for the group and for how we will work moving forward – that’s a very difficult line,” he said. “I won’t always get that right but in the end I’m the manager.

“I’ve made a decision and I think it was appropriate for how we want to work moving forward. Raheem is a very important player for us but I felt it was the right thing.”

The manager refused an opportunity to deny that he had been minded to send Sterling home before team-mates protested. “I am not prepared to go into detail,” he said.

Regarding Henderson’s specific role Southgate again stonewalled. “It is important to always be as fair as possible in any decision-making I take,” he said.

“Quite a number of our senior players have been active in discussions during yesterday. That is an important process because I want to get a feel for where the group are and how we can move forward together.”

Ben Chilwell, the Leicester full back, did offer an insight into the process. “Joe and Raheem got the chance to talk [at a team meeting],” he said. “Raheem wanted to apologise and Joe wanted to get stuff off his chest as well. Raheem said it’s not in his nature, which it’s not. No one’s trying to make excuses for him.

“It hasn’t even been mentioned today [Tuesday]. We had a meeting and it was purely on Raheem and Joe getting their points across so that it could be completely squashed.”

Southgate would not be drawn regarding whether Sterling will remain in England’s leadership group. He said: “The decision has been made not to consider Raheem for the game on Thursday. Raheem explained that for a very brief moment his emotions ran over and it would be correct to say that was not the same for Joe.

“I am very impressed with the players with how they worked that through collectively. Then I had to make some difficult calls on that. But that is done and end of discussion.”

Asked how a similar incident might be dealt with in future Southgate said: “In the way it has this time. That I consult very closely with all of the players and in particular the senior players.

“It’s brought us a rod of togetherness, which is still there and that we’re a united group. I love all of my players. We’re like a family and all families have disagreements but the most important thing for any family is that you communicate and work through those disagreements.”

Southgate voiced disquiet at leaks from the camp. “There seems to be all sorts of info being passed from so many different areas,” he said. “That is a very difficult situation, one we have to think about moving forward. It’s something I have to accept and something I have to deal with.” – Guardian