Leinster flex their muscles and land knockout blow on Connacht 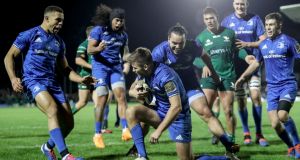 Leinster’s Ross Byrne is congratulated by team-mates after scoring their fifth try in the Guinness Pro 14 game against Connacht at The Sportsground in Galway. Photograph: Dan Sheridan/Inpho

Leinster ramped up their Champions Cup preparations with a demolition of Connacht in the season’s opening interprovincial at the Galway Sportsground on Friday night.

Connacht had no answer to Leo Cullen’s men, who preserved their 100 per cent unbeaten Pro 14 record, and dished out a lesson in power, economy and expertise.

While both sides were missing frontline players when Robbie Henshaw and Kieran Marmion were late withdrawals, it made little difference to Leinster’s attacking prowess.

Leinster arrived with more than an edge – unbeaten, top of conference A, and with a playing hand bolstered by several aces from the World Cup.

Connacht, with their two internationals back in the squad, were looking to build on their run of four wins. As an exercise in building momentum for European rugby, it was worthwhile for the winners, but a harsh reality check for Connacht. This loss, at home, will hurt And Friend’s current squad of players hoping for payback after last year’s unforgettable game in the RDS when Leinster powered home with 17 unanswered points to grab the victory in the 82nd minute.

This time around it was Connacht who needed to demonstrate that ability as the Pro 14 champions swept into a 35-6 half-time lead. With Leinster targeting a Champions Cup win, they can still welcome back another eight internationals. Connacht’s ambitions, realistically, will be determined by this domestic competition.

Their injury woes are now approaching crisis in the aftermath of this bruising at the hands of Leinster, and they now come up against European thoroughbreds in Montpellier, Toulouse and high-flying Gloucester.

Connacht enjoyed a brief, but deceptive period of control early in the game, capitalising on a rare overthrown Leinster lineout to attack inside their opponents’ half, and they were first to open the scoring after Finlay Bealham was tackled high by Max Deegan, Jack Carty potting the penalty after four minutes.

But the lead was short-lived. Within four minutes Leinster had replied and they would take control for the remainder of the half. Moving the ball swiftly through the middle from a lineout, Leinster’s recycle was swift and accurate before prop Andrew Porter barrelled his way through three defenders to touch down, outhalf Ross Byrne converting the touchline conversion for a 7-3 lead.

Cullen’s men continued to control territory and the pace of the game as Connacht struggled to exit their 22 , not helped by some poor kicking and under-pressure knock-ons. Missing their frontline locks, they struggled in the lineouts, providing Leinster with another golden opportunity which they took. Scott Fardy did the damage and hooker Ronan Kelleher claimed the touch down after 19 minutes.

There was no respite for Connacht, although Leinster can count themselves lucky not to have been reduced to 14 players after a high tackle on Carty by openside Will Connors – the incensed home crowd having to be satisfied with a Darragh Leader penalty. Thereafter the Leinster pack took over again, and Connacht had no answer.

Setting up field position before forcing the penalty, Leinster hooker Kelleher again benefited from a lineout maul to claim a third try by the 22nd minute, Byrne converting again for a 21-6 lead.

Connacht’s lack of clinical execution continued to play into Leinster’s hands, and from a poor clearance to touch, there was simply only one response from Leinster. The pack drove forward, Joe Tomane featured prominently, and eventually it was was Porter who finished off a succession of charges to wrap the bonus point by the 30th minute – all tries coming from the frontrow, all converted by Ross Byrne.

Connacht handed Leinster the platform for the fifth try when Stephen Fitzgerald was unable to control possession, and from the scrum Leinster sent the ball through the hands. Tomane once again broke through the middle before Ross Byrne sold a dummy and strolled over and converted for a half-time lead of 35-6.

It was men against boys, but Connacht’s traditional fighting spirit was needed more than ever in the second half . It was evident when they carved an opportunity from a penalty which they finished with a try after Carty produced a GAA-style pinpoint kick across field for Fitzgerald who had a clear path to the line.

And although the sting had gone out of the match, Friend’s men produced a 10-minute defensive effort only for James Lowe to score a sixth try on an easy run after an intercept inside the Leinster half.

Victories over Leinster are rare, but the hardened experience of Cullen’s men prevented Connacht from throwing many retaliatory punches.