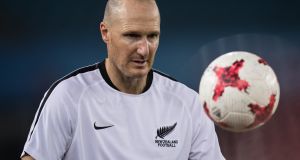 Last November when New Zealand visited Lansdowne Road to play an autumn rugby international the sold-out signs were up months in advance despite prices for ordinary tickets crashing through the €100 barrier for the first time.

Twelve months on, the return of a New Zealand side to the Aviva Stadium is generating levels of enthusiasm that reminds one of Willie Whitelaw’s accusation that political rival Harold Wilson was “going round the country stirring up apathy”.

When you play soccer for New Zealand living in the shadows of the All Blacks is an occupational hazard. However, the lack of interest in this particular friendly appears to have spread as far as the visitors’ dressing room, with striker Kosta Barbarouses rejecting a call-up, preferring instead to play for his club Sydney FC against his former employer Melbourne Victory.

What little media attention the match has received has largely focused on the fact that the match is a historic first meeting of the Republic of Ireland and the New Zealand.

However, New Zealand played in Dublin during their last visit to Europe in June 2017 in perhaps the strangest friendly match to take place in Ireland in recent years. As part of their preparations for that summer’s Confederations Cup New Zealand visited Stradbrook to play Cabinteely FC.

Despite not being an international both national anthems were played, but sadly no haka was performed even though the visitors turned out in an all-black kit. Perhaps inspired by wearing such a famous jersey New Zealand went on to win 5-2, with Chris Wood of Burnley scoring twice.

Despite this impressive warm up the Confederations Cup ended badly for New Zealand with a group-stage exit following defeats to hosts Russia, Portugal and Mexico.

The New Zealand team are known as the All Whites. Those who consider this nickname a pale imitation of their rugby equivalents should save their sympathy for the national basketball team who go by the moniker The Tall Blacks.

Often overlooked in a nation obsessed by rugby union is that fact that New Zealand has a proud footballing history, and have twice qualified for the World Cup.

Their first appearance in 1982 ended in disappointment, with New Zealand finishing bottom of their group after three defeats. However, they made a remarkable return to the tournament 28 years later with draws in the group stage against Slovakia (1-1), Paraguay (0-0) and defending champions Italy (1-1), leaving New Zealand to bow out with honour as the only undefeated team at the 2010 World Cup.

Qualifying for the World Cup has always been a struggle for New Zealand as the Oceania Football Federation in which they complete is only given half a place in the tournament in contrast to the 13 places allocated to Uefa. This means that the best team in Oceania must win a further intercontinental playoff to qualify for the finals. Last time around in 2017 New Zealand lost this playoff on a 2-0 aggregate to Peru.

However, certain Kiwis manage to find a way to exert huge influence over World Cup tournaments that New Zealand don’t even qualify for. Take for example football administrator Charles Dempsey. As head of the Oceania Football Federation Dempsey was mandated to favour South Africa over Germany as host for the 2006 World Cup. However, when the vote was actually taken in 2000 the then 79-year-old Dempsey dramatically abstained in the final ballot enabling the Germans to secure the tournament on a 12-11 split.

Had Dempsey voted in accordance with his instructions the vote would have ended 12-12 leaving then Fifa president Sepp Blatter with the tie-breaking vote. As Blatter was keen to go down in history as the man who brought the finals to Africa for the first time this was expected to be cast in favour of South Africa who instead had to wait a further four years to act as hosts.

The bulk of the New Zealand team is usually drawn from Wellington Phoenix for the simple reason that they are the country’s only professional side. When the club was established in 2007 their fans were asked to suggest possible names, with the Phoenix eventually being chosen to symbolise the new club rising from the ashes of the defunct New Zealand Knights FC.

However, not all supporters shared this sense of optimism, with one long suffering fan suggesting that the new Wellington-based outfit should instead be called Capital Punishment.

The team actually competes in the Australian A-League which involves significant travel. Matches between the Perth Glory and Wellington Phoenix have been given the oxymoronic label of “the distance derby” as the 5,255km journey is thought to be the longest road trip for any domestic league fixture anywhere in the world.

Currently New Zealand are the strongest nation in the Oceania Federation following the decision of Australia to move to Asian qualifying in 2005. This decision was in part motivated by the uncompetitive nature of many Oceania matches against the likes of American Samoa, who Australia beat 31-0 in a World Cup qualifier in 2001.

In that game the goals flew in so quickly that after the final whistle the match statistician had to perform a recount to confirm the result, with both the stadium scoreboard and many supporters suggesting that the game actually ended 32-0. And New Zealand even had an influence here as striker Archie Thompson who scored a world record 13 (or possibly 14) goals that day was actually born in Waikato, New Zealand.

Australia’s exit combined with a guaranteed place for the Oceania Federation at every World Cup when the tournament expands to 48 teams from 2026 onwards means that New Zealand are likely to regularly qualify for future finals.

Assessing the current form of New Zealand is difficult as they have not played a competitive game for well over a year. However, new manager Danny Hay (who played a handful of Premier League games for Leeds United in 1999-2000) travels to Dublin with a number of impressive young players, including Ryan Thomas, Liberato Cacace and the excellent Sarprett Singh.

Prospects are even brighter for the New Zealand woman’s team (the Football Ferns). The under-17 side made history when they finished third at the under-17 women’s World Cup in 2018, becoming the first New Zealand national team ever to win a medal at a Fifa event.

Now that New Zealand football have guaranteed the woman’s team equal pay and conditions with the All Whites, further progress is expected of a side that already ranks just outside the world top 20.