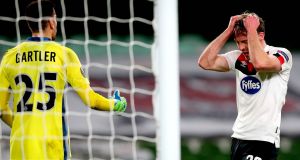 Ireland head coach Andy Farrell has named Billy Burns at number 10 in his team to face Georgia this Sunday at the Aviva stadium. It’s one of nine changes from the England defeat, with Munster’s uncapped Shane Daly named among the replacements. On his team selection, Farrell says: “We’re glad to grow the pool and find out about people. Then, when it comes to the Six Nations after Christmas hopefully that pool is grown and you’ve got a few more headaches along the way.” Click here for Patrick Madden’s all you need to know guide ahead of the latest Autumn Nations Cup fixture. Leinster will not be in action this weekend after their Pro14 clash with the Scarlets was cancelled on Thursday following the positive tests of three players from the Welsh side for Covid-19.

Defensive errors proved costly yet again as Rapid Vienna took the gifts on offer to beat Dundalk 3-1 at the Aviva Stadium. The Irish side are yet to register a point after four Europa League group games and Emmet Malone explains that any chance of picking up some against Molde away would require them to, “for a start, sort out their defending”. Elsewhere in the competition last night Celtic’s worrying form continued with a 4-1 defeat to Sparta Prague. Tottenham and Arsenal enjoyed comfortable wins, with Leicester joining the latter in securing their passage to the knockout stages with a 3-3 draw against Braga. The British government has announced its new tiering measures for England with 10 Premier League clubs placed in the strictest category, Tier 3, while the other half will welcome back 2,000 fans next week. Huge crowds gathered to say goodbye to Diego Maradona in Buenos Aires and Napoli on Thursday. The Argentine government extended the public wake after trouble had flared up between police and fans.

11 Before you buy an electric vehicle, ask: Will I drive it enough to make it eco-friendly?

12 What a work-from-home space should cost: Converted attic, garden office or spare room

14 Miriam Lord: The Bisto Kids get a taste of their own Davy gravy

17 Vaccination of ‘high risk’ citizens against Covid-19 to begin next week, Dáil hears

19 Long Covid in children: New data is cause for concern, scientists say

20 Irish Times view on the restless state of unionism

24 New to the Parish: Abdullah Afghan and Fatima Abdullah arrived from Afghanistan via Pakistan