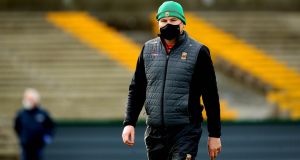 James Horan has described as “outrageous” the 26-player match day panel limit which has so far been enforced throughout the championship, and called for urgent easing of it ahead of Mayo’s All-Ireland football semi-final against Tipperary on Sunday week.

The situation had also been described as “unacceptable” by Limerick hurling manager John Kiely, given the GAA’s outright limit of 40 people from each county being permitted to attend each game.

“I know John Kiely raised it, and we’ve been saying it for quite a while, but not allowing the panel to go to games is outrageous, to be honest,” said Horan.

“I think the players to a certain extent are being taken for granted, I genuinely do, in a lot of things. We have guys who have given a decade, some of them more, and it may be their second or last time going to Croke Park, or whatever.”

Horan has introduced some 19 debutants over the last two seasons, which means several of his longest serving players aren’t part of that 26-man limit: “So for them to have trained all year, given absolutely everything, and them not to be allowed into a venue is outrageous, it genuinely is. But hopefully there is murmurings it will be changed for the semi-final, we’ll be out of Level 5, but even in Level 5, there are a lot of guys in yellow bibs hanging around a lot of stadiums.

“There are a lot of protocols that need to be in place for sure, but you can’t tell me you can’t have 10 players that have given a huge amount, and have them socially distanced around the stadium for games as well. So I do think that’s key for the All-Ireland semi-final, because it’s an absolute killer for some guys, to be honest.”

Any easing of that 26-player match day panel limit will be entirely dependent on the Government’s review of current Level 5 restrictions come December 1st; it will come too late for this weekend’s All-Ireland hurling semi-finals, but there is the possibility of the 36 players being able to attend the All-Ireland hurling final on Sunday December 13th, plus the football semi-finals (December 5th-6th) and final (December 19th).

Kiely spoke of being “offended” by that 26-player match day panel limit in the aftermath of Limerick’s Munster hurling final win over Waterford earlier this month, which sealed back-to-back provincial titles the first time in 39 years: the Munster Cup, he insisted, would only be presented when all current 36-panel members could be in attendance.