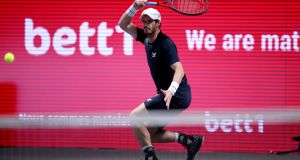 Andy Murray says the Association of Tennis Professionals, which governs the men’s game, should take domestic abuse cases such as the one which has engulfed Alexander Zverev over the past month “extremely seriously”.

The German world No 7 – who lost to the eventual champion Daniil Medevev and the world No 1 Novak Djokovic in the ATP Tour Finals in London last week – denied on an almost daily basis claims by Olya Sharypova that he had abused her during their long relationship.

“I don’t know how long it was, but it certainly was not immediate,” Murray said of the ATP’s statement of November 13th, two weeks after Sharypova’s claims became public in the Russian media. “But I have read some stuff, and obviously tennis doesn’t have a domestic abuse policy. That is something we as a sport should be looking into, so the ATP know what to do in that situation, rather than having to think and react to it. They can be a bit more proactive in a situation like that. They need to take it extremely seriously and see what comes of it in the coming months.”

The ATP statement condemned “any form of violence or abuse”, and added: “We expect all members of the Tour to do the same, and to refrain from any conduct that is violent, abusive, or puts others at risk.” A review would only follow legal investigation and “due process”, the statement said. So far, Sharypova and Zverev have declined to seek legal advice.

Murray, who has not played since a disappointing loss to Fernando Verdasco in Cologne last month, said in a wide-ranging interview he expected players would be willing to take coronavirus vaccines before tournaments so the Tour can “get back to normality”.

He added: “I would hope that all the players would be willing to do that for the good of the sport – providing everything has proved to be safe, [WITH]clinical trials done and there are not any significant side effects. From what I’ve been hearing on the TV and on the news, there shouldn’t really be any long-term effects.”

As for Djokovic’s reported reluctance to vaccinate, Murray said: “I read a few weeks after he’d said he wouldn’t be keen on doing it that, if it was something that had to be done for him to play the sport, he would.”

Murray, who trains and hits nearly every day at the National Tennis Centre at Roehampton, admits he has work to do to reach acceptable match fitness at 33 but he has experienced no pain from the psoas hip muscle injury which struck him down at the US Open in September.

“I started practising two weeks ago. I’ve been doing tons of work in the gym, trying to build towards beating all of my personal bests, which has been quite exciting for me. I’m really motivated. The only thing that I maybe won’t get to the same level is the speed. But I’m hoping that by improving my strength and my power that that will help me get a little bit faster on the court. There’s no reason I can’t get it back to what it was before. And that wasn’t the case probably in the last year. I feel good.”

Murray says he has heard that the Australian Open, scheduled to start on January 18th, might be postponed for “a couple of weeks”, not pushed back to later in February or March, as reported there last week, because it would then bump up against American hard-court tournaments in Indian Wells and Miami.

“I don’t think that would work for the sport as they’re two huge tournaments in March. The best-case scenario now is to put it back a couple of weeks. That would allow the players to get over there at the beginning of January and prepare properly for the event. I’ll go as soon as I can.”

The Victorian government is yet to decide if players must be quarantined without playing in tournaments or practising for 14 days, although they could not arrive before January 1st. Murray says that is an issue to be resolved.

“It would be tricky. A lot of players are coming from very cold climates. To ask them to play in 35, 36-degree heat with no match preparation just increases the risk of injuries, and possibly the quality of tennis is not going to be that high. It wouldn’t be a deal-breaker for me. It just makes it a little bit tougher.”

Meanwhile, he is looking forward to Christmas with his wife, Kim, and their children at home in Surrey.

“I’d originally planned not being around for Christmas when we thought we were going to have to be away from December 15th. So that’s one of the positives about a delay. Not getting to see your extended families is tough around that time of year but, if that’s what we’ve got to do to keep everyone safe for the time being, it’s probably worth it.”

Murray’s 2020 comeback was mixed but he thinks he can go deep in big tournaments again. “If I’m fit, I will. I haven’t forgotten how to play tennis. I know I will perform and win big matches if I can get properly fit and healthy for an extended period of time.”

A major goal in 2021 for the two-times Olympic gold medallist is going to the postponed Tokyo Games. “I would love to compete in the Olympics again. That would be huge for me – in the top few priorities for the year. And I’d love to play at Wimbledon again, same with the Aussie Open, and then, if I’m fit and well, I’d be pumped to go and try and win another medal in Tokyo.” - Guardian