2,000 supporters to be allowed in stadiums in areas under Tier 2 restrictions 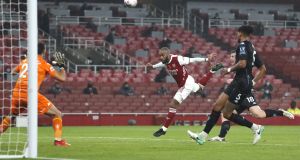 The Premier League will be split down the middle when the national lockdown in England ends next week, with half the division’s 20 clubs able to welcome back fans, including those in Liverpool and London, and the other half not.

After the British government announced new tiering measures for England on Thursday, 10 top-flight clubs were placed in the strictest category, Tier 3.

The other 10 clubs in the top division can allow up to 2,000 supporters into stadiums because they fall into Tier 2 restrictions: Arsenal, Brighton, Chelsea, Crystal Palace, Everton, Fulham, Liverpool, Southampton, Tottenham and West Ham.

Not a single club in England’s four top divisions falls into the lowest category of Tier 1 restrictions, where 4,000 fans could be permitted. The tiers will be reviewed in mid-December.

Arsenal will be the first Premier League club to have fans back when they play Rapid Vienna in the Europa League next Thursday. A number of EFL matches are due to be played next Wednesday in front of supporters and fixtures may be moved to that day from Tuesday to allow fans in.

“We all know how difficult life is for everyone at the moment so it’s a step in the right direction though, a small gesture. For the smaller clubs it’s greater – they live off their gates. I’m all for the smaller clubs getting some income but at St James’ 2,000 or 4,000 fans is neither here nor there; not with the numbers we can have here.” – Guardian