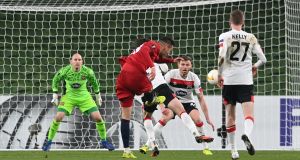 With both teams having contributed to the other’s goal haul three weeks ago with their defensive errors, Dundalk coach Shane Keegan had suggested on Wednesday that whichever of them could sort themselves out at the back here would win this group game. Neither side, it turned out, could quite manage it but when it came to finishing the Austrians were comfortably superior. That, in the end, was enough for them.

They started and finished shakily enough but when it really mattered, the hosts made nothing of the opportunities presented to them and after what turned out to be another evening of traded mishaps, Vienna were worthy winners without managing to be entirely comfortable or convincing.

Their couple of early unforced errors certainly suggested they might be defensively vulnerable again but then Seán Hoare took things up a level or two on that front when he tested Filippo Giovagnoli’s mantra about mistakes being punished at this level by making two in quick succession.

Having been fortunate to get the ball back after having given it away once, he appeared to be shaping up for something a little more clever than passing the ball straight to Srdjan Grahovac who promptly fed Christoph Knassmullner in space. The midfielder had come to Dublin looking for a fifth goal in five games and got it in some style with a shot from 25 metres.

There might have been more in the spell that followed as Dundalk came close to holding their own in terms of possession but Vienna looked by far the more menacing. Michael Duffy did force one half-decent save from visiting goalkeeper Paul Gartler but it was nothing like the two Rogers had to make to keep his side in it.

Vienna’s passing when in possession at this stage of the evening was far more assured and purposeful than that of the Irish side’s and there was a hint of masterclass about their second goal, the product of a move that had started with their right back pinned down on the touchline deep inside his own half. Two diagonal runs, five passes and a cross later Ercan Kara headed home unchallenged from the space between a line of central defenders and Seán Gannon. Everyone looked surprised by and disappointed with everyone else.

The need to shake things up a bit was reflected in the home side’s triple substitution at half-time which almost started to pay off when Dundalk won their first penalty of the game a few minutes later.

It was comical stuff from a neutral’s perspective with Gartler playing the ball short to Mateo Barac on the corner of the six-yard box from where the Croatian international set out, slowly, across the face of his own goal. Daniel Kelly, on for Hoare, stepped in to dispossess him and the defender fouled him as suddenly realised what was unfolding. Nathan Oduwa, on for David McMillan, who had scored two spot kicks in the away game, then coolly sent his effort low and wide of the left-hand post.

When Knasmullner set up Kara for the striker’s second, a curling strike from the edge of the area, that looked to be very much that but Oduwa then won a penalty himself after having become entangled in Grahovac’s legs and after a delay for consultations with the management team, during which Pat McEleney stood clutching the ball, Chris Shields successfully put this one away.

Having seen his side surrender a winning position at the weekend, this must have been just a little unnerving for coach Dietmar Kuhbauer, whose side’s control of the contest had certainly slipped since the better spells of the first half.

Sure enough, Dundalk had chances with Kelly firing over from the middle of the area and then, late on, Oduwa doing much the same twice from decent positions quite close to goal, but there were a couple of other half-chances and enough spirit about the pursuit of a second to at least improve the overall complexion of it all.

This, though, had been their best remaining hope of picking up points in the group. Molde away would look a better prospect if the Norwegians were not locked in a tight race now with Vienna to qualify but securing something would not necessarily be beyond the Irish side. That, though, assumes that they can, for a start, sort out their defending.