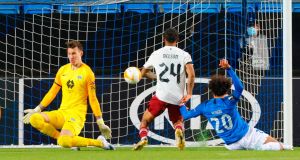 Nicolas Pepe showed the positive side of his game as he bounced back by scoring the opener to help Arsenal win in Molde and secure qualification to the Europa League knock-out stages.

The Ivory Coast winger kept his place in Arsenal’s side despite being criticised by manager Mikel Arteta following his red card in the goalless draw at Leeds on Sunday.

Fast-forward four days and the club-record signing made amends by shining as the Gunners won 3-0 in Norway with teenage forward Folarin Balogun grabbing his first senior goal after Reiss Nelson had doubled the lead.

The result means Arsenal are through to the round of 32 and can assure themselves top spot in Group B with a positive result at home to Rapid Vienna next week – a game which will see 2,000 supporters return to the Emirates Stadium for the first time in nine months.

Jamie Vardy struck deep into stoppage time to send Leicester through to the last 32 with a thrilling 3-3 draw against Braga in Portugal.

With Zorya Luhansk beating AEK Athens in the other game in Group G, a draw was good enough for the Foxes to seal qualification with two matches remaining.

Their chance looked to have gone after Fransergio restored Braga’s lead for the third time on the night in injury time, but Vardy pounced with 95 minutes on the clock.

Earlier, Harvey Barnes cancelled out Ali Al Musrati opener before Paulinho scored to send the hosts into half-time in front. Luke Thomas netted another equaliser for the Foxes after 78 minutes before the late drama.

Neil Lennon will find himself under further pressure after Celtic tumbled out of the Europa League with a dismal 4-1 defeat by Sparta Prague at the Generali Arena.

A section of the Celtic support had publicly called for the Hoops boss to go earlier in the week but even they would have been encouraged when recalled striker Odsonne Edouard gave the Scottish champions the lead in the 15th minute, but poor defending again proved costly.

David Hancko levelled in the 27th minute and then Lukas Julis, who scored a hat-trick in Sparta’s 4-1 win at Parkhead earlier in the month, put the home side ahead and the Czech outfit also hit the post before the break.

Celtic responded positively after half-time but Julis grabbed his second in the 80th minute with substitute Srdan Plavsic adding a fourth in the final seconds.

That left the Parkhead side hopelessly bottom of Group H with one point from four fixtures, two wins in their last nine games in all competitions and with another inquest imminent.

Carlos Vinicius scored his first two goals for Tottenham to help them cruise to a 4-0 win over Ludogorets in Group J.

Harry Winks added a third after half-time from close to the halfway line – although there were doubts over whether he meant it – before Lucas Moura wrapped up the scoring late on to keep Spurs on course for the knock-out phase.

Jose Mourinho introduced Dane Scarlett with eight minutes left and the 16-year-old in the process became the youngest player to feature for the club, beating John Bostock’s previous record.

Rangers suffered another late collapse against Benfica as Steven Gerrard’s side missed out on the chance to plant one foot in the last 32.

Gerrard’s men looked to be on course for a famous scalp in what would have been the Ibrox club’s 150th European win after Scott Arfield and Kemar Roofe put them ahead.

But just as they did in Lisbon three weeks ago, Gers failed to hold onto their lead and were forced to settle for a 2-2 draw.

Jorge Jesus’s substitutions made the difference as Goncalo Ramos and Pizzi climbed off the bench to snatch a point for the Portuguese giants with two goals in three minutes.