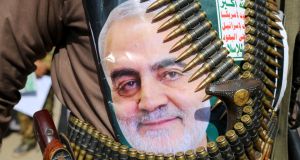 A poster of Iranian military commander Qassem Suleimani worn by a Houthi supporter at a rally in Saada, Yemen to denounce the US killing. The writing on the poster reads: ‘God is the Greatest, Death to America, Death to Israel, Curse on the Jews, Victory to Islam.’ Photograph: Naif Rahma/Reuters

“Ladies and gentlemen, we got him.”

I can still remember the exultant tone of Paul Bremer, the American governor of post-invasion Iraq, as he announced the capture of Saddam Hussein. Bremer’s exhilaration was understandable. But it also pointed to a persistent fallacy that has undermined US foreign policy for decades. You could call it the “Dr Evil syndrome”.

This is the idea, popular in Hollywood, that killing or capturing a “bad guy” is the key to solving a complex foreign policy problem. It did not work out like that with Saddam. And it is unlikely that the Dr Evil theory will fare any better after the killing last week of Qassem Suleimani, Iran’s most feared military commander.

Many of the “bad guys” eliminated by the US over the years were genuinely evil. Those successfully targeted have included not just Saddam and Suleimani, but also Osama bin Laden, the head of al-Qaeda, and Muammar Gadafy, the tyrannical leader of Libya.

It is emotionally cathartic for the US to finally catch up with an old enemy, such as bin Laden. Even Suleimani, who the vast majority of Americans had never heard of, could be made a proxy for all the slights and setbacks that the US has suffered at the hands of Iran since the Islamic revolution of 1979.

But the record suggests that taking out a famous bad guy almost never yields lasting gains in US security or influence, which are the usual measures of foreign-policy success. That is partly because Dr Evils generally emerge in deeply dysfunctional countries. Removing them does not remove the social and political pathologies that produce these people in the first place. In fact, it may, for a while, make those problems worse.

In the ensuing years, Libya has descended into anarchy and become a base for people-traffickers and radical Islamists

In 2003, US president George W Bush suggested that the capture of Saddam would be “crucial to the rise of a free Iraq”. But Iraq did not turn into a stable, pro-Western democracy. Instead it remained a fractured, violent country which fell increasingly under the sway of Iran.

Gadafy was another longstanding foe of America, whose compound was bombed by the US in 1986, during the Reagan years. The US and its allies backed an uprising against him in 2011, and the colonel was killed by his Libyan adversaries. But, in the ensuing years, Libya has descended into anarchy and become a base for people-traffickers and radical Islamists.

After the 9/11 attacks, it became a psychological and political necessity for the US eventually to catch up with bin Laden. His death dealt a further blow to an already-weakened al-Qaeda. But Islamist militancy and terrorism resurfaced in new forms – in particular, through the rise of Isis in Iraq and Syria. In a reminder of the complexity of the real world, as opposed to the Hollywood version of it, Suleimani – the Iranian commander the Americans have just killed – played an important role in repressing Isis.

The assassination of Suleimani will not fix America’s problem with Iran, any more than executing Saddam fixed the problem with Iraq. John Bolton, Donald Trump’s erstwhile national security adviser, is tweeting hopefully about the possibility of “regime change” in Iran. But even if that happens (and most experts seem doubtful that it will), the experience of Iraq and Libya does not suggest that the US will necessarily like the aftermath.

Assuming the Iranian regime holds on to power, it may well become an even more dangerous adversary for the US. The Iranians now have both the opportunity and the motive to go after American targets in the region. The regime could also go all-out to develop nuclear weapons. Trump could find himself sucked into another of those “endless wars” in the Middle East that he has promised to end.

The malign consequences of the killing of Suleimani could extend well beyond the Middle East – by encouraging other countries to follow America’s example. Assassinations as a tool of foreign policy were made illegal by the US in the 1970s, after a Congressional inquiry into some of the murkier actions of the CIA during the cold war.

Both US and international law place severe restrictions on political assassination, which is why the Trump administration insists that strikes such as those aimed at Suleimani, and before him Abu Bakr al-Baghdadi, a leader of Isis, are acts of self-defence aimed at terrorists. But the definition of “terrorism” may now be flexible enough to tempt both Russia and China, should they wish to emulate America by eliminating foreign enemies with drone strikes.

The decision to disavow assassination as a tool of US foreign policy was not made solely on moral grounds. American officials had also noticed that the tactic was often ineffective and counter-productive.

The strategy that did eventually allow the US to prevail in the cold war demanded patience, restraint and a willingness to avoid reaching for quick, violent fixes. It was laid out in 1947 by George Kennan, the original “wise man” of US foreign policy. He recommended the “long-term, patient but firm and vigilant containment of Russian expansive tendencies”.

Faced with Iran’s much less threatening expansive tendencies, America should once again have chosen patience and vigilance. Instead, it has fallen once again for the Dr Evil fallacy, with dangerous consequences for the Middle East and the wider world.