London warns US against attacking cultural sites in Iraq 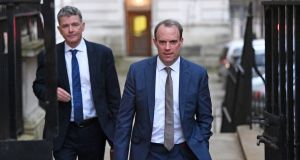 Britain has warned Donald Trump against targeting cultural sites in Iran as the crisis over the killing of Qassem Suleimani exposed a rift between London and Washington.

The US president has listed 52 targets, including cultural sites, for attack if Iran retaliates for the killing but British foreign secretary Dominic Raab said on Monday that such action would breach conventions on the conduct of war.

“We have been very clear that cultural sites are protected under international law and we would expect that to be respected,” he said.

The 1954 Hague Convention for the Protection of Cultural Property in the event of Armed Conflict says that respect must be shown for cultural property during military conflicts.

British prime minister Boris Johnson has avoided criticising the killing of Suleimani or Mr Trump’s rhetoric, and the prime minister’s official spokesman on Monday suggested that the killing could have been legitimate.

“States have a right to take action such as this in self-defence and the US have been clear that Suleimani was plotting imminent attacks on American diplomats and military personnel,” he said.

In a phone call with Iraq’s prime minister Adel Abdul Mahdi on Monday, Mr Johnson urged him to allow British troops to remain in the country despite a vote in the Iraqi parliament calling on all foreign troops to leave.

Mr Johnson told his Iraqi counterpart he respected Iraq’s sovereignty and the approximately 400 British troops in the country were working with Iraqi forces to fight against Islamic State.

“We urge the Iraqi government to ensure the coalition is able to continue our vital work countering this shared threat,” Mr Johnson’s spokesman said.

In a joint statement with Germany’s Angela Merkel and France’s Emmanuel Macron on Sunday night, Mr Johnson called for restraint on all sides.

“There is now an urgent need for de-escalation. We call on all parties to exercise utmost restraint and responsibility. The current cycle of violence in Iraq must be stopped,” the statement said.

“We stand ready to continue our engagement with all sides in order to contribute to defuse tensions and restore stability to the region.”